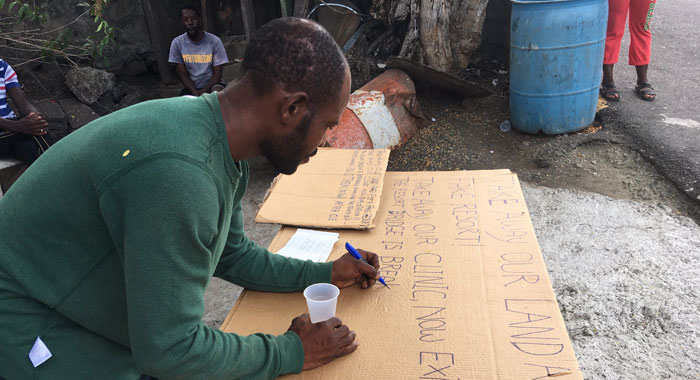 A resident of Buccament Bay has slammed what he described at the “fake opening” of the newly constructed polyclinic there.

“They take away our land, put the fake resort, we ain’t have any work to do; put the fake opening of the clinic and right now we are seeking work in the community,” Cheston Butcher told iWitness News on Tuesday.

The 35-year-old man said the opening of the clinic was “fake” because it is yet to provide health services to residents.

“People have been staying in pain, suffering from … toothache and we need something to be done about that. No work at all has been going on in the clinic since the fake opening,” Butcher said.

The EC$4.5 million clinic was officially opened amidst much fanfare and specifying on April 15 but is yet to open its doors to the public.

Butcher spoke among a handful of residents of the fishing village who demonstrated near the clinic.

They expressed displeasure that residents of the village had not been employed there.

They say that a woman who was the janitor at the old clinic for almost two decades learned when she turned up to work on Monday, that she was no longer on the staff.

iWitness News understands that the protest forced health officials to keep the clinic closed until next Monday.

Butcher, noting the overgrown grass in the yard of the polyclinic, said that he is available to provide gardening services.

He said he has a lot of experience having worked with a landscaping company for years and has his own equipment with which he can do the job.

He told iWitness News that the Buccament Bay Resort — which has been shuttered since December 2016 because of financial problems — is “fake…because since they put the resort there, no work has not been going on now”.