CDC clamps down on incendiaries at Victoria Park 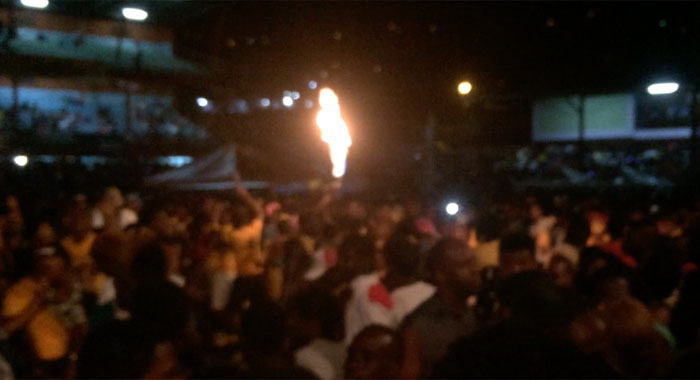 Persons who use insecticides and other aerosols to throw flames as part of their festivities at Vincy Mas events at Victoria Park are courting trouble with the law.

The Carnival Development Corporation (CDC) said that legal authorities say the use of incendiary devices in an uncontrolled space is against the law.

“So while we think it is fantastic to have Baygon cans, Bop cans or whatever up in the air blowing flames, we have actually had incidents reported to us in other events where persons have been injured because of it,” Chair of the CDC, Ricardo Adams told a press conference on Tuesday.

“We just want to say that from a CDC perspective that we are going to ask the police to be as stringent as they normally are in terms of monitoring of the use of those flame throwers in CDC shows.”

Adams said that carnival planners are looking forward to the cooperation of the public and the police.

Regarding the CDC’s own use of pyrotechnics at the park, Adams said there are areas that are zoned and the CDC keeps people away from those zones.

He said that show managers also keep persons away from these areas during performances and alert them as to when the pyrotechnics are to be used.

“What we are specifically talking about is people in the middle of crowds using uncontrolled — they are not in a controlled spaced with can of Baygon or Bop, or whatever; they use insecticides or aerosols and flames etc, in those areas which could be a danger to persons in close proximity.”

He said the CDC would ask the police to be stringent in monitoring the use of incendiaries.

He said the CDC is also appealing to the public not to invade bands and other carnival parades with carts and other items during the Mardi Gras, J’ouvert, the Monday street party and rural carnivals.

“Persons would have paid for the opportunity to enjoy themselves in a space that is free from too much encumbrance and so we want to appeal in the rural carnivals to the persons with the carts and so on who want to get involved, when we get to Carnival Monday, on J’ouvert morning, to the persons who bring in the carts and want to invade the bands, please allow the masqueraders the opportunity to enjoy themselves without having to worry about where they are stepping.”

He said that if patrons are not allowed to enjoy themselves, the Vincy Mas product will not grow

Adams said it is easier to keep a happy Vincy Mas customer than to reach out to a new one.

One reply on “CDC clamps down on incendiaries at Victoria Park”