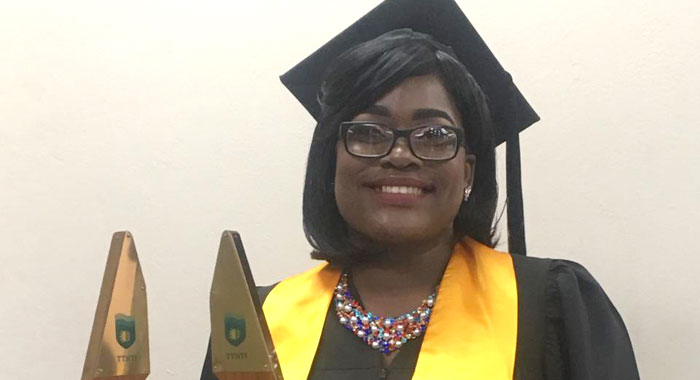 Vincentian Netanya Samuel is valedictorian at the Trinidad and Tobago Hospitality and Tourism Institute.

A Vincentian who graduated valedictorian at a regional tertiary institution has urged her fellow graduates to think of their education as their ticket to change the world.

“Who would have thought this small island girl would be standing before you today,” Netanya Samuel, told the graduation ceremony of the Trinidad and Tobago Hospitality and Tourism Institute (TTHTI).

Samuel, who is from Campden Park, completed an associate’s degree in culinary management at the institution and graduated on May 21 with First Class honours.

She also received the Chief Executive Officer Award for maintaining a GPA of over 3.7 for the duration of the programme, becoming the first non-national of Trinidad and Tobago to be valedictorian.

In her valedictory address, Samuel said Philippians 4:13 — I can do all things through Christ who strengthens me — helped her make it through the two-year programme.

“From a tender age, becoming a chef was my dream, couldn’t see myself becoming anything else. I admired my grandmother and mother who believed in my dreams no matter how impractical they may seem,” she said.

She said that, at the institution, it took no time for everyone to know that she was from “the small island with the best rum”.

“I always spoke proudly about my beautiful St. Vincent and the Grenadines that I held close to my heart. Because of this, I was given the name ‘Vincy’”.

Samuel said that as much as there were good times at TTHTI, there were also   trying times.

“Our perseverance was truly tested, we cried, got upset and even wanted to give up but we knew we couldn’t. I remember one day my mom called me and I was furious about the increase in fees and she said to me, ‘The Lord would never allow you to start and not finish.’ I believed and trusted Him to see me through because without Him I would not have been here today. “

She said that students’ creativity was also tested as they were faced with mystery baskets, creating menus and also hosting an entire event.

“This taught us that chefs are truly magicians but according to Mrs. Shortte-Charles ‘the show must go on’. We did what we did best and became magicians and it paid off.

“The many obstacles faced at TTHTI taught us to be attentive, strong-minded and to speak up for what is right and stand by what we believed in. It was not easy but we stood together as a student body. Despite it all, we made it through every storm together and victoriously. We kept our eyes on the prize and pushed through and here we are today as proud graduands.”

Samuel said that her two years at the institution taught her to appreciate the people in her life.

“It is okay to be different, to have a strong mind-set and to push yourself past your limits.”

She encouraged present and future students at TTHTI  “to strive for excellence, never limit yourself and don’t be afraid to face your fears and to come out of your comfort zone.

“It is not a walk in a park because a lot of sacrifices, sleepless nights and hard work have to be made. Parents continue to encourage, push and believe in them,” Samuel said.