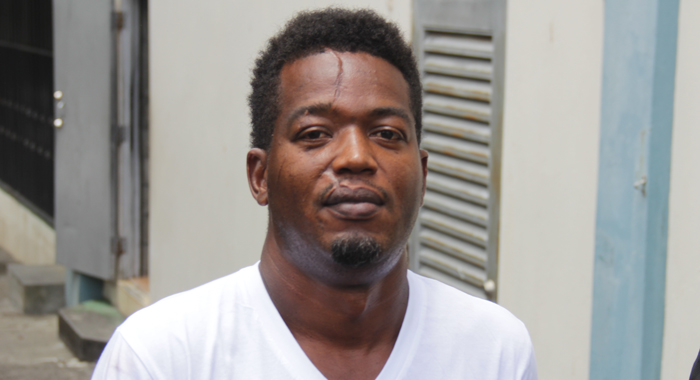 Money launderer Wilfred Clouden leaves the Serious Offences Court on Monday He has to come up with EC$150,000 by Dec. 30 to avoid jail time. (iWN photo)

Wilfred Roderick Sadeak Clouden, along with his wife, Jenee Elissa Govia-Clouden, both of Mt Bentick, Georgetown, was charged with 16 counts of money laundering.

However, when they were arraigned last Friday before Chief Magistrate Rechanne Browne at the Serious Offences Court in Kingstown, Clouden pleaded guilty to the charge and his wife pleaded not guilty.

The prosecution accepted Clouden’s guilty plea and withdrew the charges against his wife.

The matter was adjourned to Monday for hearing of the facts, mitigation and sentencing.

Clouden could have been sentenced to a maximum of five years in prison or a fine of EC$500,000, or both.

However, in light of his early guilty plea and the mitigating factors, the chief magistrate decided that a custodial sentence was appropriate for the man who had no relevant previous convictions.

She began with a notional fine of EC$300,000 and after considering the mitigating and aggravating factors of the case, arrived at a final figure of EC$150,000.

Browne gave Clouden until Dec. 30, 2019 to pay the fine or spend one year in jail, in default.

The charges against Clouden and Govia-Clouden came at the end of an extensive investigation by financial investigator Constable Richardson of the Financial Intelligence Unit.

The chief magistrate praised the detective’s investigation of the case and his presentation of the facts, saying that his work had made it easier for the court to arrive at an appropriate sentence.

According to the facts presented to the court, the investigation into the Cloudens activities commenced on May 9, 2009 and during the investigation, it was revealed that Clouden and his wife were receiving monies via remittance agencies and converting it to euros.

In 2015, the investigation obtained a production order into the subjects and their business activities at Western Union Money Transfer and the Bank of St. Vincent and the Grenadines (BoSVG).

Investigators found that between March 2011and November 2015, Clouden received EC$140,955.79 via Western Union from 19 senders in Dominica, Antigua, the United States, the British Virgin Islands (BVI), England and St. Lucia.

Financial crime investigators interviewed the couple in relation to their business activities and Clouden told them he had received the monies from Western Union and bought the euros on behalf of Godfrey “Tyler” Cumberbatch, Wilmore “Tally Green” Goodgie, and Kamari “Kam” Neptune.

Cumberbatch, Goodgie, and Neptune are all dead, having been shot and killed between June 2014 and December 2016. The three men also had criminal backgrounds.

Clouden told police that the men would pay him for the transactions and sometimes his wife would collect monies at Western Union and convert it to euros then he would hand the money over to these men.

Clouden told police he never suspected that the monies had been derived from criminal conduct and that his only concern was whether the monies were counterfeit.

During her interview, Govia-Clouden told police that her husband told her to collect the monies at Western Union and he also gave her the euros to convert.

She said that after collecting the money at Western Union, she would give it to her husband and that she did not know who sent the monies via Western Union or where her husband was getting the euros.

In his mitigation, Connell asked that a non-custodial sentence be imposed on Govia, even as he added that the man had no money to pay a fine.

He said that if the court was minded to impose a custodial sentence, it should be suspended.

In support of his argument, he referred to a recent case in which two men, who took turns having unlawful sexual intercourse with a 12-year old girl, were given suspended sentences.

The lawyer argued that in suspending that sentence the court was showing its flexibility in a case in which a girl was robbed of something that she could never regain.

In his submissions, Senior Prosecutor Adolphus Delplesche said that the penalties available to the court show the seriousness with which lawmakers take the offences of money laundering.

He said that the society couldn’t afford to allow dirty money to pollute the financial system.

The prosecutor asked for a custodial sentence.