Leacock is ‘out of place’ — Eustace 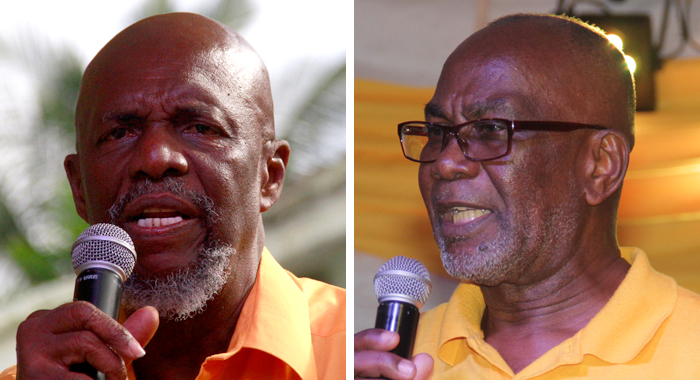 Former president of the New Democratic Party, Arnhim Eustace, says that St. Clair Leacock, one of the party’s two vice presidents, was “out of place” to have made statements on radio last week about Eustace’s future in politics.

In an interview on Xtreme FM last week Tuesday, Leacock, who is Member of Parliament for Central Kingstown, announced that Eustace, 74, who has been representing East Kingstown since 1998, will not seek re-election.

Leacock said “three exciting prospects” had been identified as possible replacements for Eustace.

He said it would only be “a matter of weeks before you hear those prospects”, adding that NDP leader, Godwin Friday would announce the replacement after discussions with Eustace.

“It is beyond doubt; Mr Eustace is not going to contest another election. I can’t say it is official; it’s common sense,” Leacock said.

“He has had operations on his knees, and you can’t run if you can’t walk. Mr Eustace can’t do all those hill climbs that he has to do and as an elder statesman of the party, he will let his wisdom and knowledge go to whoever will contest that seat,” Leacock said of the politician who he said was the best prime minister that St. Vincent and the Grenadines never had.

It has become obvious over the past few months that Eustace is having some mobility challenges and has been observed holding on to people or objects as he moves around.

iWitness News was reliably informed that the government has offered to provide the former prime minister with a police driver, but it appears that he has not accepted the offer.

Eustace was prime minister from October 2000 to March 2001, when the NDP was booted out of office, after 17 years.

In his weekly radio appearance on the NDP’s “New Times” on NICE Radio, Eustace said on Tuesday that he had heard and read Leacock’s May 21 announcement.

“Major Leacock is both previous and out of place to have done so,” Eustace said, adding, “Greater discipline, maturity and respect for me and the people of East Kingstown are to be expected of a military man and politician.

“Soon, and only in the time of my choosing — my choosing, I will inform the good people of my constituency that I have had the honour to represent these 21 years, I will tell them what my decision is. I will never delegate that responsibility. Neither the people of East Kingstown would be denied that dignity,” Eustace said as he continued to read a prepared statement.

“I also wish to point out that whoever succeeds me would not be denied my support because they have a physical disability. The declaration by any representative of the NDP that if you can’t walk you can run is both vulgar and backward.

Reverting to the politics of the 1960s, Eustace said at the end of the prepared statement, “Have we forgotten the legacy of Terdie James and the constituency of Marriaqua. I urge Vincentians to come forward for public office, regardless of their sex, religion, age or disability. The NDP is the party of inclusion and ours, our party is a big tent,”

Terdie James, in the 1960s, was a resourceful and popular banana farmer from the Marriaqua Valley who was said to be leaning towards representing the area under the opposition leadership of E.T. Joshua of the PPP while the St. Vincent Labour Party (SVLP) headed by R. M. Cato held office.

Levi Latham of the SVLP, another popular lawmaker, was the then representative for Marriaqua.   Popular oral tradition of the day holds that “Papa Latham” in an effort to quash the upcoming challenge by Terdie James, who demonstrated a mild physical disability by a limp, remarked publicly that  James could not even walk, far less could he run (for public office).

Before reading the statement, Eustace said he has been very quiet on issues relating to his constituency but had chosen to address them during his show that day.

“I know a lot of people might not want me or agree that I should address it, you should just play cool and let everything be cool. There ain’t nothing called cool. I will address that issue briefly today, I would not go into any long discussion on it but I would say my own thinking on the matter,” said Eustace, who has, over the years, used his show to respond to comments that members of his party, including its founder, former prime minister Sir James Mitchell had made about him.

At the same time, however, he has remained largely silent as Prime Minister Ralph Gonsalves and his Unity Labour Party have characterised him as a weak leader, unsuitable to be prime minister.

Om Tuesday, Eustace noted this longstanding membership within the NDP.

“I am very conscious that when I became leader of the party after Sir James, I saw what the state of this party was. I’ve worked with many others and many hours, at a time when this party was at its lowest ebb, and I played a role in bringing it back to the party that it was,” he said.

In 2001, the NDP lost the general elections, moving from an 8-7 majority, to retaining just three of the parliamentary seats, while the remaining 12 went to the ULP.

Eustace was the only NDP politician in St. Vincent to win a seat, while the party also retained the two Grenadines seats, a result that would be repeated in the 2005 poll.

“So I have gone through the hard knocks of the past and now the current state of the New Democratic Party,” Eustace said.

Eustace said that he knew some people would be concerned about his statement.

“… but I don’t intend to get into any depth and discussion on that, I simply want to make a statement because the statements made by others have affected me personally, the members of my party, my constituency, and generally speaking, the whole position of the New Democratic Party.”

He said his statement is one in which he wishes to “express my view of the situation that we are now faced with”.

On Nov. 23, 2016, when he stepped down as NDP leader, Eustace said he would continue to represent East Kingstown “until a proper replacement is found.

“And the emphasis is on proper,” he said, adding that he would work with his constituency division “to find a suitable candidate”.

General elections are constitutionally due in March 2021, but are widely expected by December 2020.

6 replies on “Leacock is ‘out of place’ — Eustace”