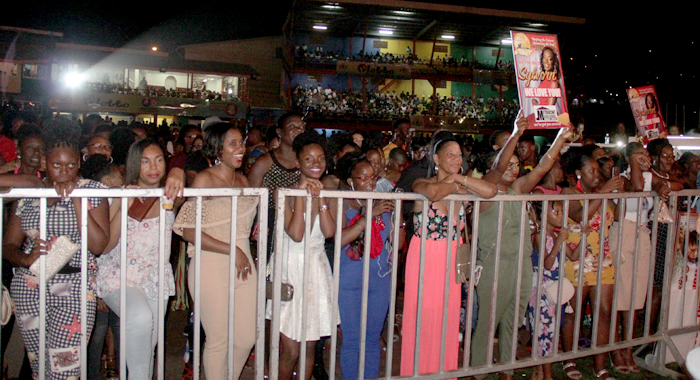 Patrons at the Miss SVG 2019 pageant in Kingstown Saturday night. The government says it will assess the impact of Vincy Mas on the Vincentian economy.

The government of St. Vincent and the Grenadines will assess the economic impact of Vincy Mas, the nation’s annual festival in now in progress.

Minister of Tourism and Culture Cecil “Ces” McKie said it is very important to determine the economic impact of carnival and other festivals on the Vincentian economy.

“We have basically agreed that we will engage the expertise that is available across some of the ministries and possibly the UWI to do an assessment of the economic impact of Vincy Mas and other cultural festivals on the economy of St. Vincent and the Grenadines,” he told a recent press conference.

McKie told the Carnival Development Corporation press briefing that such a study was done some time ago.

“But I think when it was scrutinised, it was found to be a little wanting. So, that’s why we are ensuring that when we do the exercise again that it is well thought out and we engage the right persons to see how, as far as possible, the end product could be something that we can accept and utilise.”

McKie said such a study is important to the tourism sector.

“We know there’s a cultural component of carnival –development of the artistes, development of the various components, possibility of exporting our culture to the region and further afield. The same thing goes for tourism as well. What good does the Vincy Mas product do for St. Vincent and the Grenadines?”

The minister said his ministry has seen annual growth in the numbers over the two-month period of carnival, with air arrivals reaching 15,000.

“Difficult to pin it down if they are actually coming for Vincy Mas, but over that two-month period, those are the numbers that are reflected. We are very encouraged with what we have seen already.”

McKie said that thus far, flights have been arriving “fairly full — over 90 per cent capacity and we are confident that … we will have even more persons on our shore for Vincy Mas 2019”.

He said that each year, the CDC board and the stakeholders review the festival and that the ministry and he, as minister, are also involved.

The CDC needs the feedback from the public also because they look at the development of the festival from a different perspective from the ministry and the stakeholders, McKie told the media.

“And it is always important that we get their feedback year after year — the patrons, the spectators, the followers of Vincy Mas — so that we can use that input in terms of further developing and defining Vincy Mas product.

“The discussion is ongoing and I hope that at the end of this year’s festival we can finalise the development plan that can take Vincy Mas into the next three to five years in terms of the developmental aspect because that is going to be very, very important.”

McKie said it is important to identify and implement things that will refresh the festival, as there is need for growth.

“And, therefore, the components are critical in terms of that growth and development.”

McKie said he can safely and confidently conclude that this year’s will be “a bumper” Vincy Mas.