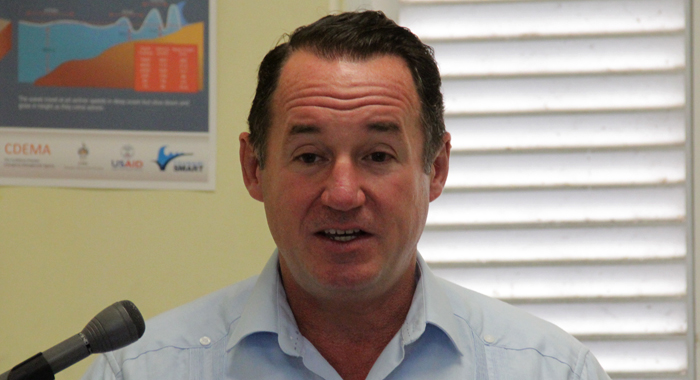 Joaquin Monserrate, deputy chief of mission at the US embassy in Barbados. (iWN photo)

The United States Embassy in Barbados says St. Vincent and the Grenadines’ bid to become a non-permanent Member of the United Nations Security Council is “a great opportunity for the Caribbean to belong to that body”.

“We would hope that St. Vincent represents, again, the values of the Caribbean: its strong support for democracy not just in Venezuela but worldwide in its concerns about a violent and aggressive attempt to lord over oceans or territory in the South China seas and its adherence to the rule of law,” Joaquin Monserrate, deputy chief of mission at the US embassy in Barbados told iWitness News on Thursday.

“So we welcome the arrival of a Caribbean brother to the Security Council,” the diplomat said.

More than 60 United Nations Member States have never been members of the Security Council, and SVG is making is first bid this year, after announcing a decade ago its decision to do so.

A state that is a member of the United Nations but not of the Security Council may participate, without a vote, in its discussions when the council considers that country’s interests to be affected.

Both members and non-members of the United Nations, if they are parties to a dispute being considered by the council, may be invited to take part, without a vote, in the council’s discussions; the council sets the conditions for participation by a non-member state.

To become a non-permanent member of the UN Security Council, a state must secure the support of two thirds of the members of the UN General Assembly.

iWitness News noted to Monserrate that he was speaking as if Kingstown had already secured the two-thirds majority support.

“If it happens, we welcome the members and we would look forward to working with St. Vincent on a constructive agenda,” he said.

Asked if Washington would support Kingstown’s bid, the envoy said the United States never states who it supports.

“But I think any of the states with which we have excellent relations would be worthy of our support.”

Asked if he considers the relationship with Kingstown to be excellent at this time, he said:

“I think St. Vincent is a great partner and the prime minister will be the first one to tell you it’s a great partner. We just showed today on resilience, disaster management, on law enforcement, it’s a great bulwark on China’s aggressive expansion. We just wish that it could stand for the same values it defends elsewhere in the case of Venezuela,” Monserrate said in the interview, which took place after his embassy deployed two satellite phones to Kingstown for use during the hurricane season.