Another Diamond man charged with murder of ‘Precious’ 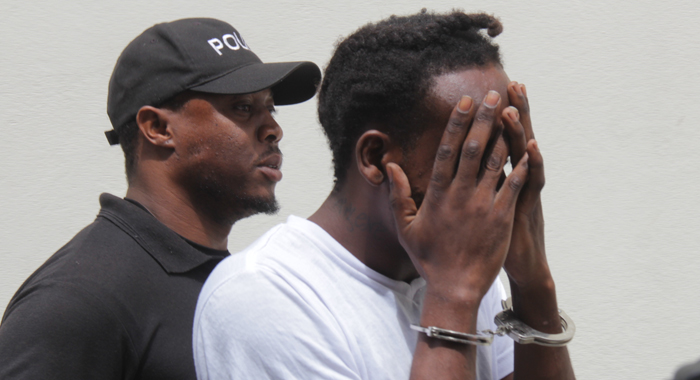 Murder accused, Etson Time, hides his face as he is escorted from court on Monday. (iWN photo)

A second man has been charged with the latest murder in St. Vincent and the Grenadines.

On Monday, Etson Timm, 23, of Diamond, appeared before the Serious Offences Court in Kingstown, charged with the May 8 murder of Darron “Precious” Davy, an 18-year-old labourer of Arnos Vale.

His court appearance came one week after fellow villager, Jeremy Alexander, 23, a farmer, also appeared before Chief Magistrate Rechanne Browne in connection with the crime.

Timm was not required to plead to the indictable charge.

He was remanded in prison until Sept. 10, for a preliminary inquiry, in which the lead investigator, detective Sergeant Carla Timm has identified 25 witnesses.

Davy was shot in the vicinity of the BRAGSA office on Lower Bay Street, Kingstown around 1:35 a.m. on May 8, police said.

He was rushed to the Milton Cato Memorial Hospital where he subsequently succumbed to his injuries.

Davy was killed just hours before the Court of Appeal would deny his father, Aaron John, a reduction in his four-year sentence for beating his girlfriend while she had a restraining order in place against him.