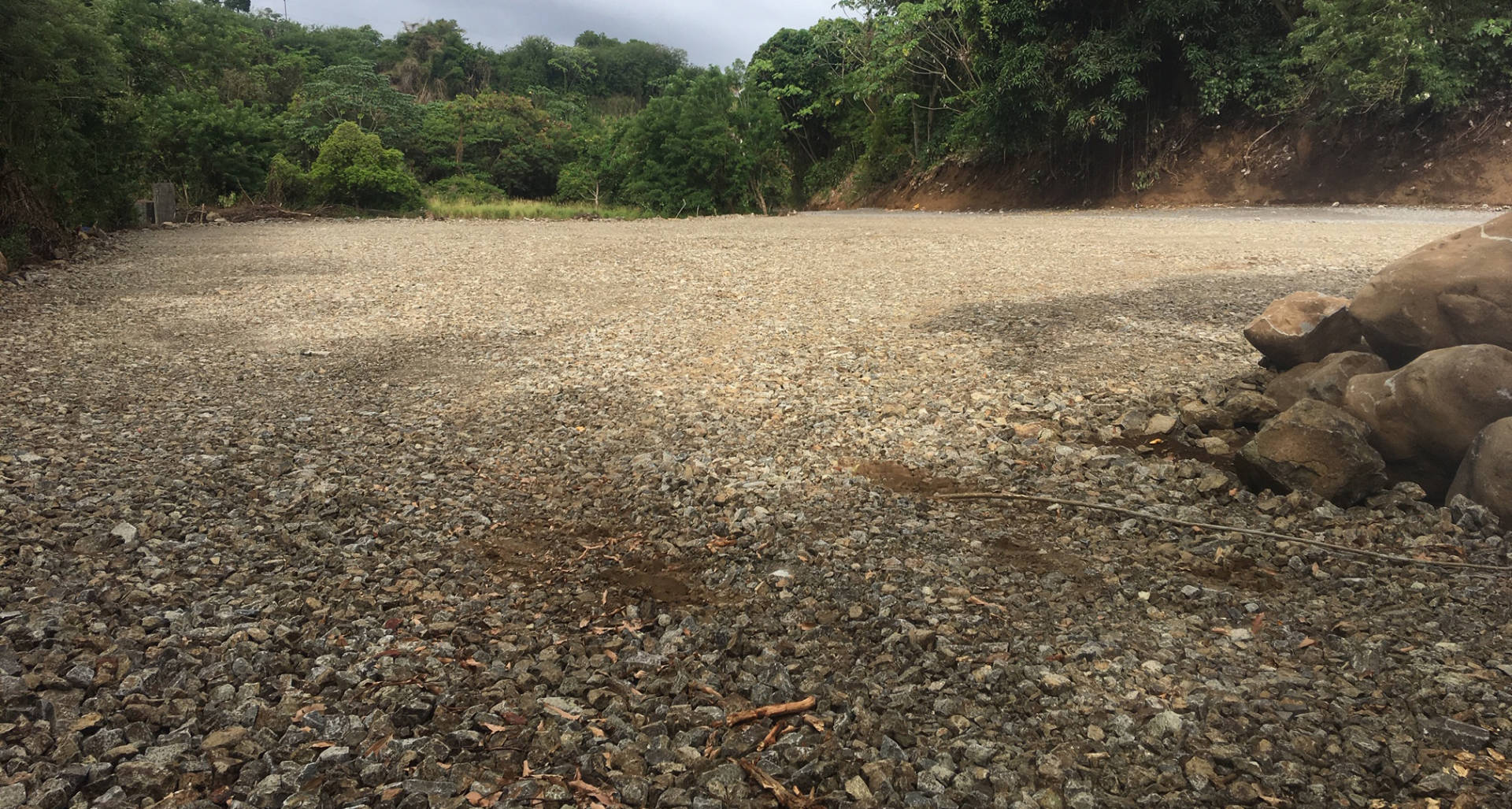 The site in Yambou that was being prepared for the asphalt and concrete batching plants. (iWN photo)

The government of St. Vincent and the Grenadines on Sunday told residents of Yambou that it would scrap its plans to relocate its asphalt and concrete batching plants to their South Windward community.

Minister of Transport and Works, Senator Julian Francis made the announcement at the end of a two-hour, cordial but frank discussion with some 50 residents at the Yambou Seventh-day Adventist Church.

The meeting was called days after a petition of more than 90 signatures was handed in to the government, objecting to the plants being located in Yambou or any residential area in the country.

Francis said it was always part of the plan to meet with residents, but the meeting was brought forward in light of the petition.

He said that having the meeting earlier would have been premature, given that is yet to acquire all of the four or so acres of land needed for the plants.

The plants were originally located at Argyle International Airport, where they produced concrete mix and asphalt for the construction of the runway, tarmac and other infrastructure there.

Francis told the meeting that it was never planned for the plants to be located at the airport site permanently.

He said that when the airport opened in February 2017, officials had raised concerns about the plants, but gave the government time to relocate them.

Last year, fire fighters at the airport began complaining, saying that the plants were preventing an unhindered view of the runway, and was also making them sick. They gave the government until Dec. 15, 2018, to shut them down, a deadline that the government met.

At Sunday’s meeting, Brian George, an engineer who works in the private sector, whom the government contracted to do an environmental and social impact assessment, told residents of his findings.

George said that there are measures that could be put in place to mitigate against these.

However, it was when he spoke about the result of his analysis of 12 months’ wind data that residents no longer contained their angst.

George said that the data suggest the winds in the area blow in an east north east direction.

He said that the area that the government identified for the plant is in a southern location relative to Yambou.

The engineer said that for winds to take the dust from the plant into Yambou, they have to come from a southern direction.

However, the residents disagreed, with one man telling George that when jets land at Argyle, he smells the fumes in Yambou.

A woman, who gave her name as Mrs. Bascombe, said that she and her children are asthmatic and told the engineer that she has been living in Yambou since she is a child and knows that the winds flow in a circular manner in the valley.

She spoke of the many frantic trips she had to make to the hospital during the construction of the airport when her child had repeated asthma attacks.

Mrs. Bascombe told the meeting that while she loves to see progress in SVG, “we need to look at things healthwise”.

She said that while she understands that a place is needed to place the plants for there to be progress in the country, without people there is no country.

“I am looking into that because I am in the mouth of the fumes,” said Mrs. Bascombe, who also told the meeting that her house is located across the river from the proposed site.

George, in response, told Mrs. Bascombe that it is common that when engineers conduct data analyses and the findings are inadequate, they will take into account local knowledge.

He said that her observation was also very important, adding that he is from Mesopotamia, their adjoining community, and understands what she was saying.

Meanwhile, one Mrs. Ramsamooj said that she was born, grew up and has been living in Yambou all her life.

She said that during her lifetime she has seen the wind direction change in the valley, adding that while the rains used to come from the direction of the Mesopotamia Valley, they are now coming from the coast.

She complained that residents were not consulted before the decision was made to place the plants there.

Mrs Ramsamooj told the meeting that Yambou has a lot of other issues that BRAGSA, the state-owned company that will manage the plants, should focus on.

“Look at the road going in there,” she said; referring to the road near to where the meeting was taking place, adding that it has remained unpaved since her grandparents live in the area.

“No representation,” said another attendee at the meeting, which was also attended by parliamentary representative for the area, Frederick Stephenson, who left the meeting before it ended, and without addressing the attendees.

And Jason Rodriguez told the works minister that the meeting had come about because he happened to learn, when Stephenson made a post on social media that the plants were to be located in Yambou.

Rodriguez said he then informed his fellow villagers and they signed the petition.

Resident Gary Thomas told the meeting that he lives 100 metres away from the site that is being prepared for the plants.

Thomas said that the wind data was taken from instruments located on the coast, adding that that data have no relevance to the plant.

“I put burglar bars on my house to keep out burglars. I have no way of keeping out dust,” he said.

He complained that he had contracted George two weeks earlier to evaluate the value of his property but George told him nothing about the plans to locate the plants close to his property.

Another resident of the area quoted the United States Department of Labour website, which speaks to the risk of exposure to asphalt fumes.

“Human studies have reported lung, stomach, and skin cancers following chronic exposures to asphalt fumes. However, these studies have been inconclusive, and the possible chronic effects to workers following exposures to asphalt fumes are areas of continuing investigations. One recent summary analysis of the available human studies found a nearly twofold increase in risk of lung and stomach cancer among roofers. Increased risks were also noted for other asphalt workers for lung, stomach, and bladder cancer, and for leukaemia.”

And, George told the meeting that there are health risks associated with such plants, adding that he has highlighted many issues in his report and suggested ways of dealing with them.

He said that if the burners at the asphalt plants are calibrated properly and the plant is well maintained, many of these risks can be reduced.

George, however, said that he could only speak to how he knows such a plant should operate.

He said that that there are various state agencies that are charged with ensuring that such plants operate in keeping with certain standards.

George, however, said that he knows that in mentioning the oversight responsibility of one state agency over another, villagers might say, “Massa bull, massa cow”.

He declined to give a yes or no answer regarding whether, in his professional opinion, he felt that the plants would be located at the site in Yambou.

Towards the end of the discussion, Clem Bartholomew, chief executive officer of BRAGSA, told the meeting that there are no concrete plans to place the plants in Yambou.

“There is a proposal,” he said, adding that the government does not have title to the lands and only has access to one-third of the lands it needs for the plants and has not paid for that one-third.

He said that a consultation with residents would have happened, but his agency decided to bring it forward.

At the meeting, residents suggested alternative sites for the plants.

Francis said that some were inappropriate and said he would look into the others.