The regional labour rights activist was speaking in a country where the government routinely legislates, rather than negotiates salary increases for public sector workers. 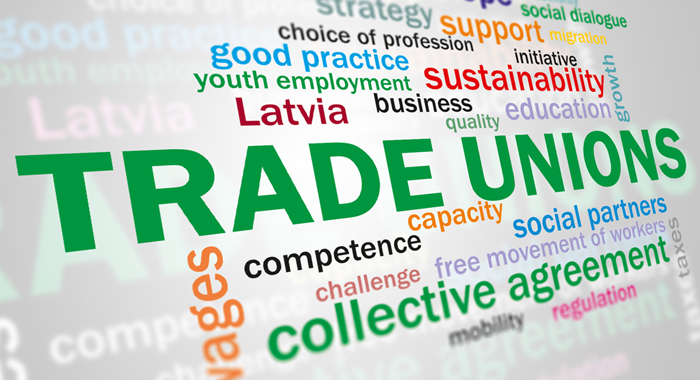 A regional trade unionist says that a self-critical look finds the labour movement in the Caribbean wanting.

“Taking a self-critical look at unionism today, … I see throughout the region in various degrees so in the various territories, … weakened trade unions with reduced membership, financially perilous and some a step away from bankruptcy,” Grenadian trade unionist and senator, Chester Humphrey said in Kingstown on Tuesday.

“I see a union movement that has been weakened in its internal democracy and, in many respects, some are lacking in accountability. I see trade union centres, be it in Barbados, Guyana, Trinidad and Tobago, St. Lucia, Antigua and Barbuda, that are divided in a period when international capital is consolidated, businesses are growing, the mass alienation of the products of one’s labour is happening on an unprecedented scale,” he told those attending the launch of Prime Minister Ralph Gonsalves’ latest book, “The Political Economy of the Labour Movement in St. Vincent and the Grenadines”.

“Yet, what is happening in the labour movement is division,” said Humphrey, who served two successive terms as general secretary of the Caribbean Congress of Labour.

“I see a labour movement in the region in places where trade union centres are now non-existent; in Dominica, for example, in Montserrat, in St. Kitts and Nevis. There was a time in St. Kitts and Nevis when the labour movement was so powerful that every member of the cabinet was a member of the trade union movement. Today, you are shocked to find if you have a trade union organisation with significant members in that country.”

He said that the trade unions today have no relationship with the informal sector, which, in some countries, constitutes a significant number of people, made up particularly of the urban poor.

“I see an expansion of precarious work and personalised contracts of employment and, therefore, the diminution of collective bargaining rights and decent work. Take a look at union facilities throughout the region today. They are dilapidated, uninviting, and, in some cases, some headquarters are not even owned by the trade unions,” Humphrey said.

“In summary, our unionism has, by and large, become stuck in the period of yesteryear’s glory and has become what I describe as penny-haggling confined exclusively to economism and have abandoned our transformative role.

“We have limited our role almost exclusively to negotiating salary increases in three and four year cycles. Most trade unionists will tell you that once the wage increases are negotiated, the rank and file show little interest in union activities until the next cycle. In fact, there is little appetite for trade union activity and even when the employers paid time is secured, it is difficult to get the majority of workers to attend trade union meetings.”

Humphrey said that the value of Gonsalves’ work is that “it outlines and defines the programmatic platform, the challenges and opportunities which face the labour movement in this period”.

He said that while he wanted to be cautious, Gonsalves’ book “presents an opportunity for us to be honest.

“It’s well written, it is scholarly, it is deep, and, as I said before, it is a piece of work that is of great value to the people of the region,” Humphrey said.

“Few revolutionary intellectuals have been able to survive outside of walls of academia, to organise and to lead the masses of working people and successfully navigate the peril of the anti-colonial, anti-imperialist finance monopoly construct under which we live. It is very important for the working class movement in St. Vincent and the Grenadines to understand the value of its leadership and to understand the historic dimensions of the mission he has undertaken — very important because, ladies and gentlemen, the likes of Ralph, Fidel, Chavez, and Maurice [Bishop] don’t come often,” he said.

Humphrey was speaking at a book launch chaired by Vincentian trade unionist Joseph “Burns” Bonadie, who is both head of the Commercial Allied and Technical Workers Union and advisor to Gonsalves on labour matters.

The regional labour rights activist was speaking in a country where the government routinely legislates, rather than negotiates salary increases for public sector workers.

Also, the Ralph Gonsalves government signed a collective bargaining agreement with the Teachers Union over a decade ago only to say, at the critical moment, that a much-touted provision that offered election leave for teachers was aspirational.

The Gonsalves government has also lost, in the courts of law, critical cases on labour issues, including having overlooked a number of public sector workers for promotion, some of whom have remained in the same position for almost three decades.