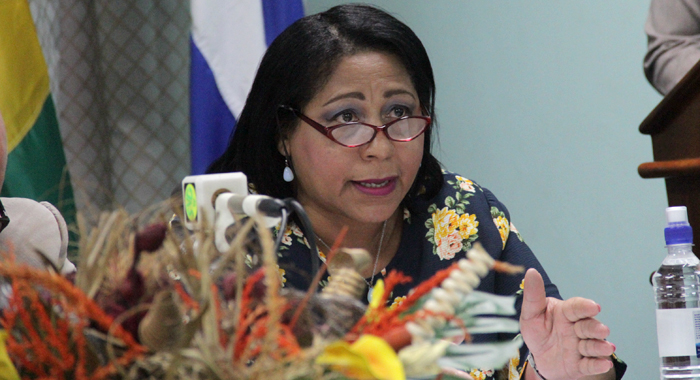 Vilma Reyes Valdespino, Cuba Ambassador to St. Vincent and the Grenadines speaking at the event in Kingstown on Thursday. (iWN photo)

Cuba’s ambassador to St. Vincent and the Grenadines, Vilma Reyes Valdespino, on Thursday, denounced the latest United States sanctions against her country.

She spoke at an event to welcome Cuban trade officials who arrived in Kingstown from Havana Wednesday night for a four-day visit to explore trade opportunities.

On Tuesday, Washington announced major new restrictions on US citizens travelling to Cuba.

The new measures block the most common way Americans are able to visit Cuba: through organised tour groups that license US citizens to travel automatically, CNN reported.

The measures also ban US cruise ships from stopping in Cuba.

“As you know, Cuba, for the last six decades is a victim of the blockades, the constant attacks of the United States.”

The envoy said Havana has repeatedly spoken out against the Helms–Burton Act, a 1996 United States federal law that strengthens and continues Washington’s embargo against Cuba, which came into effect in 1958, after the Cuban Revolution.

“Of course they will not achieve that,” Valdespino said, adding, “We are fighting for more than 60 years not only to survive, but to continue developing.

“The blockade that has an enormous cost for the Cuban economy and the lives of all Cubans did not distract us from development of the economy, development in science, from taking care of the environment, from helping other countries and we are resolved to continue helping all the countries, especially the Caribbean brothers, sisters and others.

The diplomat thanked SVG for the support it gives to Cuba every year in speaking out against the embargo.

She said that this year, Cuba faces a new struggle at the United Nations against the blockade, adding, “and we are sure we will count on the support of St. Vincent and the Grenadines and all our Caribbean brothers”.

The diplomat said that, in the meanwhile, Cuba continues to work and look for business possibilities and cooperation and collaboration in all sectors.

“We are the nations of the south and the south should look to the south in the first step and afterward, the rest of the world,” Valdespino said.

3 replies on “Cuban envoy in SVG denounces latest US sanctions”