Fish sold out in Kingstown on Fisherman’s Day

I was told that this could never happen in Kingstown.” — Raoul Lewis, chairman of Fisherman’s Day 2019 Committee 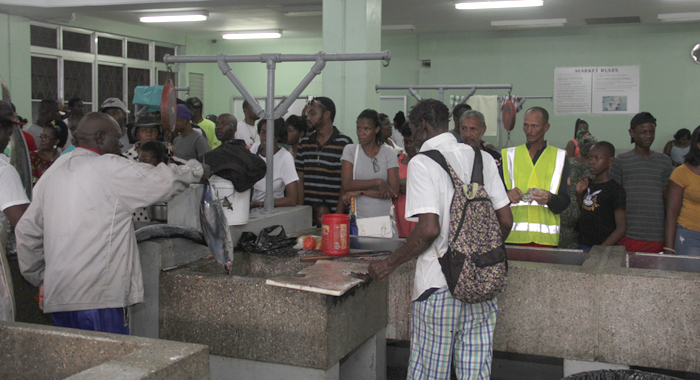 The chairman of the Fisherman’s Day 2019 Committee told Monday’s closing celebrations that his group was pleased with the outcome of the event, which was held in Kingstown for the first time in a decade.

“I have a speech here but I am not going to even read it because I am so happy and so proud to see what happened here today,” Raoul Lewis told the event at Little Tokyo, Kingstown.

“I was told that this could never happen in Kingstown. After 10 years, this is the first time that Fisherman’s Day is being held in Kingstown. It took a lot of work but we made it happen and I’m happy that all the customers can come out and get fish at a cheaper price.”

Fish was sold in Kingstown on Monday at EC$7 per pound, down from the average of EC$8, depending on the species.

The event had found a home in Calliaqua for the last 10 years, and organisers decided to move it back to Kingstown this year.

Fishermen based in Kingstown had complained about inadequate docking facilities, insufficient number of stalls, and cleanliness of the Calliaqua Fisheries complex and had pushed for the event to be moved back to the capital.

They further said sales of fish in Calliaqua on Fisherman’s Day are often low, with most of the catch having to be transported into Kingstown.

However, 30 Calliaqua-based fishermen opted to not participate in the national activities and to take part in a fish fest in Calliaqua on the same day as Fisherman’s Day.

Lewis thanked Minister of Fisheries, Saboto Caesar, for allowing the Fisherman’s Day Committee to have the event in Kingstown.

“Prime minister, we are so happy for this,” he told Ralph Gonsalves, who delivered the feature address at the event.

“The fishermen of Kingstown are so happy for this… There is no fish left in the market. This is the first time that this has happened in 10 years,” Lewis said.

“In the past, all the fish would come down to Kingstown and be stored to sell the next day. I think we need to have fisherman’s day twice a year. What do you think about that?” he said to cheers from the audience.”

Lewis noted that next year is the 45th anniversary of Fisherman’s Day, adding that the sector is looking to have a bigger and better celebration.

“So I’m not going to say much, thank you very much for coming out and showing your appreciation, we thank all our sponsors, for everything that they have given to us and Town Board and the fire department for cleaning up this place and making it comfortable for you to have some fun today.”