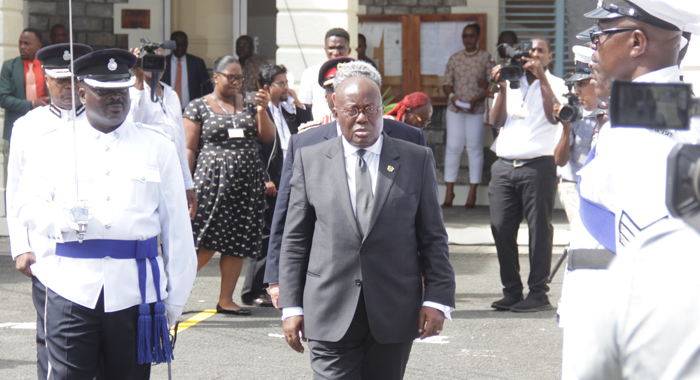 President of Ghana, Nana Addo Dankwa Akufo-Addo inspects a guard of honor outside the Parliament building in Kingstown on Wednesday. (iWN photo)

The West African nation of Ghana has been lauded for its role in last Friday’s election of St. Vincent and the Grenadines (SVG) to the United Nations Security Council as a non-permanent member.

On Wednesday, Prime Minister Ralph Gonsalves thanked President of Ghana, Nana Addo Dankwa Akufo-Addo, who was on a two-day official visit to SVG, for Accra’s support in ensuring SVG’s election to the UNSC for the 2020-2021 term.

“He is a man of his word. I like people like that,” Gonsalves said at a press conference, adding that Akufo-Addo had kept his promise to visit SVG, reciprocating a visit that Gonsalves made to Accra last November.

SVG defeated El Salvador 185 voted to 6 to take the seat for Latin America and Caribbean nations at the Security Council.

Gonsalves said that through their vote, African countries “all said as great as the people of El Salvador are, that, on this occasion, not one vote in Africa will go to El Salvador, even as I say, the Salvadorians are a great people and we highly respect the leader in El Salvador — we have been working with each other for a while and loyalty counts, and this profound friendship.”

The prime minister said that he had no hesitation to say to the people of SVG and the Caribbean “we are working and building a relationship with an outstanding leader and he has come here to the region and we have to find a way, very shortly, to get a number of our Caribbean personalities, including St. Vincent and the Grenadines, to take a charter to Ghana.

“I see there is a big plane, a 747 in which a local company has ownership, I see the minister of Tourism is chuckling about this and he would know that this is something that is doable and we must set about it, at least, immediately,” he said of the aircraft which has been parked at the Argyle International Airport since May 26, amidst speculation about its owners’ plans for it.

Speaking at the same press conference, Akufo-Addo said he was happy that his country was able to assist in SVG’s election.

“Within the principle, it was important. A very respected government and leader of a country, no matter how small, which has important contribution to the resolution of issues on the international scale, on the global scale, and that has taken principled stances on many of the outstanding issues of our time,” he said.

“That is a worthy member of the Security Council. And what we could do to assist came from our recognition that yes, St. Vincent and the Grenadines could go onto that council, speak for a lot of people who constitute the globe and defend their interest,” Akufo-Addo said.

“So, at a time when we are having a lot of difficulties because of the attitudes of one or two important leaders of the globe, it is important that we have a country that is prepared to stand up for the multilateral system for the resolution of international issues and conflict.  So good luck to you in the Security Council and I am sure we will be hearing of you.”