Vincies invited to visit Ghana in this ‘Year of Return’ 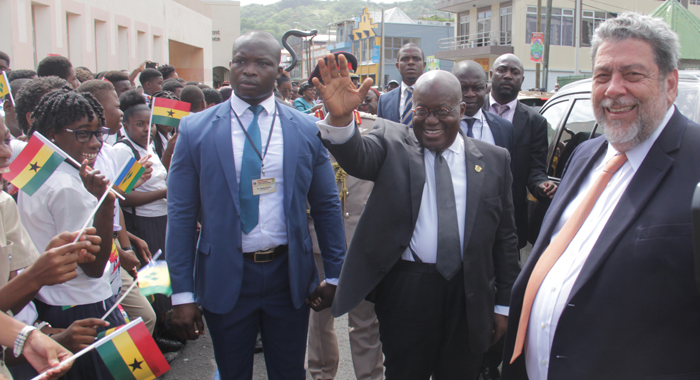 President of Ghana, Nana Addo Dankwa Akufo-Addo, centre, greets students and other persons in Kingstown on Wednesday while Prime Minister Ralph Gonsalves of St. Vincent and the Grenadines, right, looks on. (iWN photo)

Four centuries after the Atlantic Slave Trade began, the president of Ghana is inviting the people of St. Vincent and the Grenadines (SVG) to visit the African nation this year, which Accra has declared “The Year of Return”.

Delivering a public lecture on Wednesday at the beginning of a two-day official visit to SVG, Nana Addo Dankwa Akufo-Addo said 2019 marks 400 years since the first recorded arrival in the Americas of slaves from West Africa.

“They were taken to the Commonwealth of Virginia in what subsequently became the United States,” he told a public lecture at the SVG Community College Villa Campus.

Akufo-Addo said those were the first of 20 million Africans who would be abducted from central and western Africa and brought in slave ships on the most perilous journey in history: The Trans Atlantic Slave Trade.

“It is important to all of us: those of us on the continent and those of us who were brought here that we find a way of testifying that never again are we going to allow ourselves to be subjected to such a dehumanising experience,” Akufo-Addo said.

Ghana has inaugurated “The Year of Return” to commemorate the commencement of the Atlantic Slave Trade and to reinforce its commitment that never again will Africans be traded like commodities.

“It’s a programme I launched in Washington in October and there are a series of events taking place this year which will commemorate that fundamental experience.”

Akufo-Addo said talking about the Year of Return and inviting Vincentians to visit Ghana for the commemoration was one of the three reasons he had come to SVG.

He said that in 1957, when Ghana obtained independence, many leaders from the Americas were there, including Martin Luther King, Cheddi Jagan, and Forbes Burnham.

On that occasion, Ghana pledged itself to the pan-African project: bringing all the people of African descent across the world to form an important bloc in the world “so that we can protect ourselves and also gain the necessary strength to be able to develop in peace,” said Akufo-Addo who came to office in January 2017.

He said that since Ghana’s independence, the pan-African project has been a major part of Ghanaian public policy.

“And we are saying to ourselves that this year, which is the Year of Return, gives us that opportunity to revive and revisit those goals and values.”

“The celebrations in Accra are going to be an occasion for us to hold hands again and to say that the linkages that we have reasserted are linkages that will not be broken, and the linkages that will mean that together, you on this side, we on the continent, will work together to grow ourselves with one clear understanding: at the end of the day, black people all over the world are judged by what goes on in Africa.

“I’m sure you know it. So many times people are telling you, you see what is going on there; they are doing this, that — all of that is an effort to demoralise you. At the end of the day, if Africa works, you work, and we are determined that with your support and encouragement, Africa will work, and work, and work, and work again.”

Akufo-Addo said he was also in SVG to reciprocate a visit by Prime Minister Ralph Gonsalves to his nation last November.

“He came and you know how he is. He turned out to be very big hit in Accra. And when he was there, he came to visit me. We began a conversation about what we, in Ghana, and you in St. Vincent and the Grenadines can do to up our relationship and also the connection between us in Africa and you here.”

The third reason for the visit was to continue with Gonsalves, the conversations that began in Accra about strengthening economic relations between the two countries.

The Ghanaian leader was making his second visit to SVG, having come about 17 years ago, when he was his country’s attorney general.

“This visit tells me about how extensive the transformation of St. Vincent and the Grenadines has been in these 17 years since I was last here, beginning with the airport.

“I came to a rather small airport so, I was a bit disconcerted when I came to this one and saw this big new modern airport. And that was an indication that, indeed, significant transformation is taking place here under the leadership of Dr. Gonsalves,” he said, referring to Argyle International Airport, which was opened in February 2017 — some seven years behind schedule.

Akufo-Addo also congratulated SVG on its election, last Friday, to a non-permanent seat on the UN Security Council, the smallest country to ever secure such a position.

“That is very strong testimony as to how the world, the international community values and regards St. Vincent and the Grenadines and you should be appropriately grateful for that recognition,” he said of the accomplishment, which would see SVG sitting on the UN Security Council for the 2020-2021 term.

“It’s an important step for us as we are determined to make sure that our entire population is educated as quickly as possible because we believe that it is human beings, educated human being that transform society, not the gold you have in your soil or the products you have in your lands or the oil you have offshore your country. It is human beings, properly formed, properly motivated, properly engaged who are those  instruments of change in the 21st Century and we want Ghanaian youth to be at the forefront of that change,” he said.

He told the students at the SVG community College that they are competing against their peers across the globe “and that is the paradigm that we want to imbibe in you so that we can all reach for the sky and make of ourselves, here in the Caribbean and on the African continent what we should make of ourselves — developed and prosperous and progressive and forward looking”.

On Wednesday, Akufo-Addo also addressed the national assembly during a special sitting of Parliament, planted a tree at SVG’s historic botanical gardens — the oldest in the Western Hemisphere.

He had a private audience with Ghanaians in SVG, met with Gonsalves with whom he co-hosted a press conference as well as attended an official reception at the office of the Prime Minister.

The visit forms part of a tour of the Caribbean that includes stops in Guyana, Trinidad and Tobago, Barbados, and Jamaica.

Since then, both countries continue to strengthen the relationship to foster greater prospects for trade, people-to-people exchanges, and cooperation in oil and gas, agriculture, education, health and tourism, as well as investment opportunities, the Agency for Public Information said.