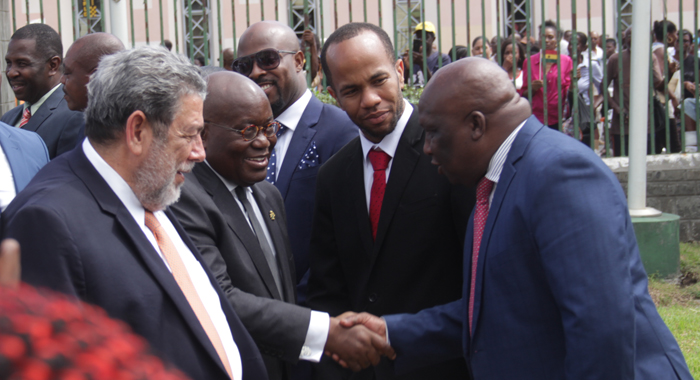 St. Vincent and the Grenadines and Ghana, on Tuesday, signed a communiqué, a central element of which is the establishment of commission for development and cooperation between both countries.

Prime Minister Ralph Gonsalves told a joint press conference with President of Ghana, Nana Addo Dankwa Akufo-Addo in Kingstown on Wednesday that the communiqué addresses a number of practical issues.

He said that the first meeting of the commission would take place in Ghana within the first half of next year and the talks will hammer out a number of matters.

“And, at a CARICOM meeting in St. Lucia in July, I will push and get the acceptance for the establishment of the Africa, Brazil, Caribbean, Diaspora of Africa Commission to do the kinds of solidarity and unity which his excellency has been speaking about, and to do so in our strategic interest.”

The press conference came at the end of the first day of a two-day official visit by Akufo-Addo to SVG as part of a tour of the region that includes visits to Guyana, Trinidad and Tobago, Barbados, and Jamaica.

At the same press conference, the visiting president said a timetable of the first quarter of 2020 has been agreed for the meeting of the SVG-Ghana commission in Accra “to see how we can develop and push economic relations between us”.

“The south-south cooperation, a lot of it is in talk. I think concrete steps like we have begun to take means that we have begun to walk the talk and it’s important that we do so and in the larger context of how we can develop the relations between ourselves, the Caribbean, our brothers and sisters in Brazil, in South America, and the diaspora in general,” Akufo-Addo said.

He said that he would also raise the idea at the forthcoming African Union Summit in July, although the agenda carries only one item: the African Continental Free trade area.

“But beyond that, we will find a way to address other matters, including the ABCD idea that Prime Minister Gonsalves has been talking about with such passion,” Akufo-Addo said.

“I think it is a good idea because we see the groupings that have been taking place in the world today. We would be lacking and confining ourselves again to being marginalised if we don’t wake up and see the necessity to strengthen and create our own grouping and work for our interest.”

The press conference came towards the end of a day when Akufo-Addo had delivered a public lecture at the Community College Villa Campus in which he encouraged Vincentians to visit the West African nation.

Akufo-Addo’s government has declared a year of return to mark the 400th anniversary since the first recorded shipment of enslaved Africans sailed to the Americas.

Also on Wednesday, he addressed a special meeting of the House of Assembly, becoming the first African leader to do so, according to Gonsalves.