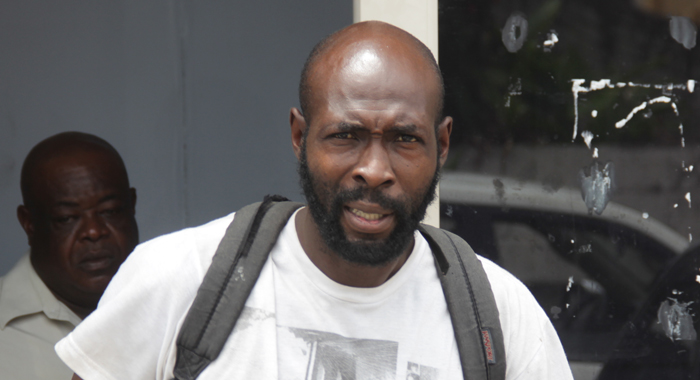 A French soldier who is in St. Vincent and the Grenadines for the Tradewinds military exercise will have to travel home on an emergency travel document, after a worker at a restaurant in Arnos Vale stole a pouch containing his passport, identity cards, driver’s licences, cash and other items.

Chill Spot Bar and Grill employee, Sheffield Blucher, 39, of Greiggs, has been ordered to repay Archambault Fredric, said to be a lieutenant in the French Army, EC$1,137.65 by this Wednesday, or spend three months in jail.

On Monday at the Kingstown Magistrate’s Court, Senior Magistrate Rickie Burnett ordered Blucher to bring the money to the court on Wednesday. The magistrate also summoned the French soldier to appear in court, so that Blucher could apologise to him.

Blucher maintained his guilty plea after the charge was put to him several times, including in dialect.

“I have to take responsibility, because I took it,” Blucher told the court of the pouch, which he said he had picked up off the ground and placed on a wall for later retrieval.

He, however, said that when he returned for the pouch, it was not there and he never examined its contents.

The facts of the case, as presented by the prosecution, are that on June 7, about 7:30 p.m., Fredric went to Chill Spot along with other officers to eat.

The soldier placed the pouch on the seat next to where he was sitting and left after eating, forgetting the pouch there.

The soldier had not gone far when he remembered the pouch. However, by the time he returned, the pouch and its contents were missing.

Fredric spoke to the management of the restaurant and none of the employees reported having seen the pouch.

As a result, the soldier reported the matter to the Calliaqua Police Station and Corporal Steaven Derby investigated.
The corporal checked the CCTV footage at the restaurant and bar and the recording revealed that Blucher took up the pouch.

Blucher was informed of the investigation and was cautioned. He gave police various explanations of what had happened to the pouch.

The police did not recover the pouch, but someone found one of the ID cards in Arnos Vale and handed it over to a police officer.

Of the contents of the pouch, only two ID cards were recovered.

Blucher told the court that he does not know what he was thinking when he decided to take the bag.

He said he had come out of the kitchen that night and was sitting outside looking at his daughter’s birth certificate when his bag fell and he saw “the small thing on the ground” and picked it up.

Blucher said he couldn’t deny taking up the pouch “because the camera is all over the place”.

He said that he was leaving the compound and his boss called him.

Blucher said he thought that his boss had seen him pick up the pouch so he placed it on a wall near the road and went back to his boss.

The defendant said that his boss asked him to do something in the kitchen and he spent 15-20 minutes completing the task.

He said he then asked his boss to buy him a drink and his boss gave him $20 with which he bought a “three (beers) for $10” and sat at the bar drinking, by which time he had forgotten he had placed the pouch on the wall.

Blucher said that by the time he left the bar about half an hour later, the pouch was not there.

Blucher was arrested on Friday.

Asked if he thinks he still has a job at Chill Spot, Blucher said yes, adding that he thinks that his boss would transfer him to the farm.

“Because he say I hang some cattle for him. I accidentally tie them so I paying him back now for them,” he explained.

The magistrate told Blucher that had he not done the first act, the pouch might not have disappeared.

“Honestly to God, I don’t know what I was thinking,” Blucher responded, saying that he had previously handed in items left behind by patrons.

“When you operate like this, you give the country a bad name,” the magistrate said.

“An employee. Instead of taking it to management and say, ‘Look, this was left here’, you went with it.”

The prosecutor, Police Constable Corlene Samuel told the court that after the incident, Blucher stayed away from work until June 15.

Blucher, however, said that he stayed away from work because his mother was ill and he had to help care for her in hospital.

He said he was in communication with his boss every day during the time away from work.

In sentencing the man, Burnett noted that he pleaded guilty, had shown some remorse, and that he has no previous convictions.

The magistrate, however, noted that some of the items were not recovered and Blucher was an employee of the business place and should have known better.

“You have given Chill Spot a bad name,” Burnett said.

“I also gave myself a bad name,” Blucher added

“You also gave the country a bad name as well, because this is someone who came to be part of an exercise in St. Vincent and he is going to take back the memory of this incident back to his country. And this thing happened while he was in company with other police officers,” Burnett said.