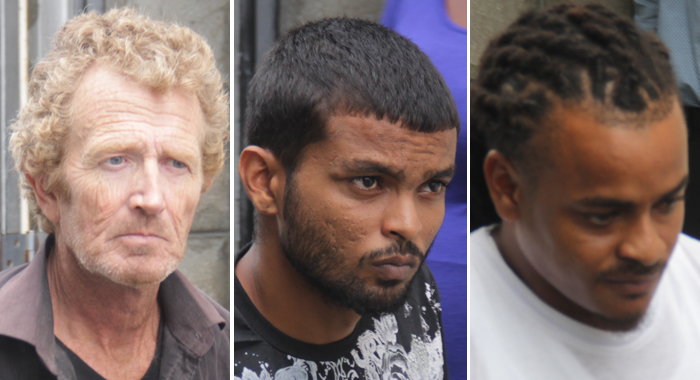 The prosecution has accepted the guilty pleas of a British sea captain on three drug charges in St. Vincent and the Grenadines but will prosecute his co-accused, a Vincentian and a Grenadian.

Senior Prosecutor Adolphus Delplesche informed the Serious Offences Court of the Crown’s decision on Thursday, almost a week after the men were arraigned.

Last Friday, at the Kingstown Magistrate’s Court, Kevin Slauter, a 57-year-old boat captain, of England, pleaded guilty to a charge that on June 13, at Richmond, he had in his possession 183,416 grammes (404 pounds) of cannabis.

He also pleaded guilty to a charge of possession of the marijuana for the purpose of drug trafficking and attempting to export the drug.

The other accused men, Vincentian Kenroy Edwards, a 31-year-old chauffeur, of Rose Bank, and Javid Chetram, a 23-year-old sailor, of Grenada, pleaded not guilty to all charges.

Delplesche told the court that he had not had a chance to look at the documents related to the case and asked that the matter be adjourned and transferred to the Serious Offences Court for last Monday.

But when the matter was called on Monday, he told the court that the prosecution was not yet ready with its decision and the matter was adjourned until Thursday.

The men’s lawyer, Grant Connell was not present when Delplesche informed the court of the prosecution’s decision.

Last Friday, Senior Magistrate Rickie Burnett had objected to bail for Slauter and Chetram, noting that they were not from the jurisdiction.

Edwards was granted bail in the sum of EC$15,000 with one surety.

He was also ordered to report to the Chateaubelair Police Station on Mondays between 8 a.m. and 8 p.m.