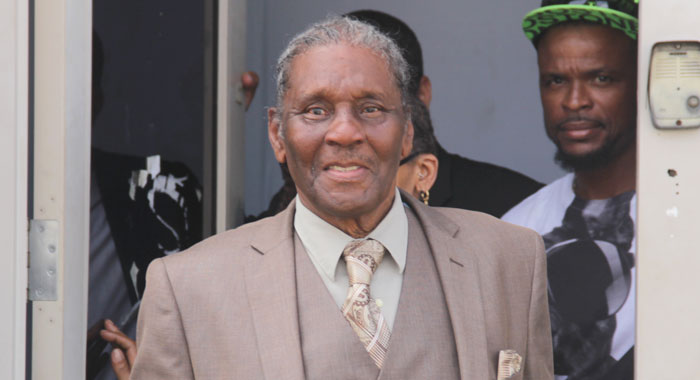 The 84-year-old man who admitted to having a .38 revolver and 115 rounds of ammunition in his possession at Layou on June 5 has been spared an immediate jail term.

This means that the man will avoid jail time if he does not break the law over the next year.

However, to avoid the inside of a prison cell, Patrick, a veteran of both the United States and British military, will have to come up with EC$12,000 by Dec. 31, 2019, or spend 12 months in prison.

One week earlier, on June 14, Burnett heard what he later described as “a stirring plea in mitigation” from Patrick’s lawyer Grant Connell.

Also on June 14, Senior Prosecutor Adolphus Delplesche made it clear that the Crown was not looking for custodial sentence in the case, and suggested a fine, beginning with the notional EC$5,000 for the firearm and EC$500 per round of ammunition, minus the relevant discounts for the early guilty plea and mitigating factors.

In handing down his sentence on Friday, Burnett, reading from prepared, handwritten notes, summarised the submission of the prosecution and the defence, and outlined the law.

He noted that Patrick’s lawyer had pointed out that his client had applied multiple times for and was denied a firearm permit.

The magistrate also noted that the lawyer said that Patrick brought the firearm and ammunition to St. Vincent and the Grenadines four decades ago and kept it in “the bosom” of his house, never once brandishing it.

He further noted that the defence had raised the issues of Patrick’s age and health, noting that he often travels to the United States for medical attention.

Burnett further reiterated the purpose of sentencing, namely punishment, deterrence, prevention and rehabilitation, and said that each case must be taken on its merit.

He said the aggravating features of the case were the prevalence of guns and ammunition in SVG, and the age and experience of the defendant.

He said Patrick is a former soldier and should have known better than to keep an unlicensed firearm and ammunition.

He, however, said Patrick age’s is also a mitigating factor, in addition to his early guilty plea and the remorse he had shown.

Burnett said the fact that Patrick had applied for a license to keep a firearm and ammunition showed a willingness to be a law-abiding citizen.
The senior magistrate said the mitigating factors in the case far outweigh the aggravating elements and noted the sentencing principles of consistency, proportionality, equity, and fairness.

He said he had also noted the precedent set by the Serious Offences Court, which hears the bulk of firearm matters.

Patrick was charged along with his son, Robert Patrick for possession of 45 rounds of the ammunition.

Robert pleaded not guilty to the charge and the prosecution withdrew the after his father accepted the facts presented by the prosecution.
The man and his son were jointly charged for ammunition which he had told police he had at his son’s house.

Chief Magistrate Rechanne Browne had recused herself from the case saying that the she knows one of the Patricks well.