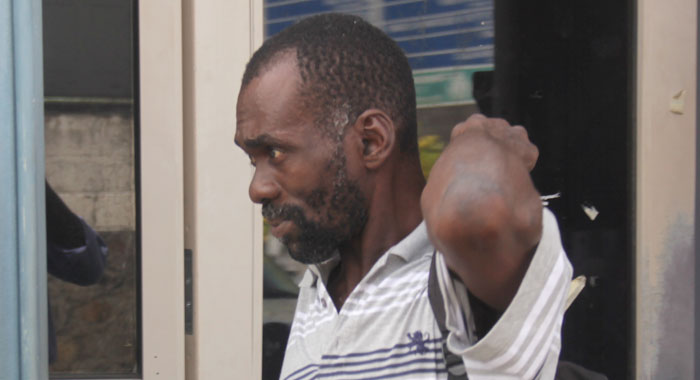 A Bequia man who burglarised a visitor’s apartment in the northern Grenadine island in March has blamed “a demon” for his actions.

“No,” the admitted burglar said.

“The last thing you want when you are visiting is for someone to invade your space like that,” the magistrate said.

Leach, 43, pleaded guilty to charges that between March 9 and 10, 2019, at Lower Bay, Bequia, he damaged two deadbolt locks and a glass window, the property of Sunset Cottage

He also pleaded guilty to a charge that between March 9 and 10, 2019, at the Lower Bay, Bequia, he burglarised Sunset Cottage and stole one black Tower knife set, value EC$240, one white iPhone 7 with gold trimmings, value US$500, one black wallet, value US$125, the property of Rebecca Bollard of the United States.

The court heard that on March 9, 2019, about 10:30 p.m., Solana Gooding, the manager of Sunset Cottage, left the property with everything intact.

The guest, Rebecca Bollard, was in her room.

When Gooding returned about 11 a.m. the following day, she discovered that the hotel had been burglarised.

The deadbolts on the doors were damaged, along with a glass window.

Bollard had left her cell phone, knife set, and wallet in the sitting room and gone into the bedroom and had locked the doors and windows.

When she checked upon arrival of the manager, the guest found that the items were missing.

The matter was reported to the police and constable Ezra Nimblett investigated.

The investigation led to the defendant, who admitted to the offence.

The iPhone was found on Leach’s person and police conducted a search at his home, where the knife set was located.

The wallet was never recovered.

In mitigation, the man told the court that he had been employed on a garbage truck for the past 25 years and is paid EC$1,050 per month.

He said he lives with his mother and has no children.

The man’s record was presented to the court, but Burnett said that since his last conviction was more than 10 years ago, he was not even permitted to look at the document when considering a sentence, in keeping with the directives of the Court of Appeal.

Leach initially told the court that he had “no explanation for my action”.

Burnett said the mitigating factors are that Leach had pleaded guilty and that most of the items were recovered.

The prosecution told the court that the cell phone was in good working condition.
The magistrate said the aggravating features are the prevalence of burglaries in St. Vincent and the Grenadines and that Leach had no explanation for his actions.

Burnett said the court has to send a message to Leach and others like him who might want to conduct themselves in a similar way.

He further said the fact that the man committed the crime although he has been employed for 25 years and is working for EC$1,050 a month, was aggravating.

For the wallet, Leach was ordered to compensate Bollard in the sum of EC$333.73 by Sept. 30 or go to prison for three months.

He is also to compensate Gooding in the sum of EC$800 by Sept. 30 or spend six months in prison.

13 replies on “Bequia man blames ‘demon’ for his burglary”