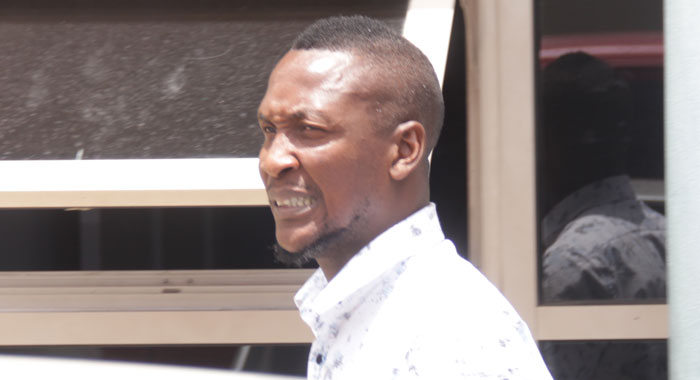 Paul Stephens was beaten at his fiancée’s funeral in Chauncey in May 2018. He is seen her leaving the Kingstown Magistrate’s Court on Friday. (iWN photo)

The process of identifying four of the six men charged in contention with the mob attack, last year, of a Barrouallie man at his fiancée’s funeral was a point of contention as the trial got underway at the Kingstown Magistrate’s Court, on Friday.

The process of identifying four of the six men charged in contention with the mob attack, last year, of a Barrouallie man at his fiancée’s funeral was a point of contention as the trial got underway at the Kingstown Magistrate’s Court, on Friday.

The men allegedly committed the crime against the Barrouallie man at the funeral of Je-Tonnia Thomas, 32, at the Chauncey Cemetery, on May 27, 2018.

The men, along with Esward Charles, of Chauncey, are also charged that on the same date and place, they did cause a disturbance to an assembly lawfully engaged in the performance of religious ceremony, to wit “the funeral service of Je-Tonnia Thomas of Chauncey”.

The men allegedly committed the crime against the Barrouallie man at the funeral of Je-Tonnia Thomas, 32, at the Chauncey Cemetery, on May 27, 2018.

The men, along with Esward Charles, of Chauncey, are also charged that on the same date and place, they did cause a disturbance to an assembly lawfully engaged in the performance of religious ceremony, to wit “the funeral service of Je-Tonnia Thomas of Chauncey”.

Junior Charles, Thomas, and Daniel are charged, separately, with possession of an offensive weapon, to wit a stone.

A video circulated via social media showed Stephens being beaten viciously as he and other mourners paid their final respects to Je-Tonnia at the Chauncey Cemetery.

Je-Tonnia was found dead on May 10, 2018, at the Kearton, Barrouallie home she shared with Stephen, who said then she was his wife.

The couple’s child was 4 months old at the time.

Police later said that the dead woman was not Je-Tonnia and an autopsy revealed that Je-Tonnia died of heart failure, resulting from an undiagnosed heart condition that made the organ larger than normal.

Stephen was the only witness to testify when the trial began in Kingstown on Friday.

He told the court that he was standing with his family at the Chauncey cemetery at Je-Tonnia’s funeral when Daniel came up and asked who is “the husband of Je-Tonnia”.

Stephen said that his brother indicated that it was he (Stephens).

“He then looked at me and say, ‘handsome man,” Stephen told the court, of Daniel, adding that Daniel then turned his back towards him and said, “This is the guy who killed Je-Tonnia.”

The complainant told the court that while his fiancée died of a heart attack, he had been accused of killing her.

He said Daniel then left the cemetery and went into the main road “and then he made a sound like a dog”.

Stephen said he then “saw the one in the blue”, referring to the accused.

At this point, counsel Ronnie Marks, who is representing some of the accused men, rose and objected, saying that Stephen was doing a dock identification.

He argued that the prosecution had no right to ask to be allowed to do a dock identification.

Marks said the police were probably thinking that there was a video circulating. He, however, said he was objecting to a dock identification, because the police had ample time to compile evidence in the matter.

However, the prosecutor, Police Constable Corlene Samuel told the court that Stephen was giving evidence and must be allowed to say who did what.

“He is not doing a dock ID. How can he give evidence without saying who did what?” she argued.

But Marks maintained that that area of the law is well developed, and said that what was, in fact, taking place was a dock identification in circumstances that the law did not allow.

Meanwhile, Linton Lewis, another of the defence counsels in the case, agreed with Marks, saying that a dock identification was, in fact, taking place.

Lewis told the court that Stephen was not asked if he knows the defendant.

The lawyer said the information given to the police gave no indication of who did what.

Lewis said that while he agrees with Marks’ objection, he had been waiting until cross examination to show inconsistencies between what Stephen was telling the court and what he had told the police.

In response, Senior Magistrate Rickie Burnett told the prosecution that he cannot tell her how to conduct her case but said she probably needed to get more evidence.

The prosecution maintained that Stephen had told the police that he did not know, but he had recognised the men who attacked him.

But Lewis said that was one of the reasons he had been waiting until cross examination to address the matter.

He said Stephen had given evidence to the police that he did not recognise the men because his head was down.

The lawyer said that when the defendant begins pointing out the accused from the dock, the issue of identification becomes very important, adding that the case would be based on identification, not recognition.

At this point, the magistrate called each defendant by name and indicated his number.

But when Marks again objected as Stephens continued his testimony,

Lewis said it might not have been wise for the prosecution to start the case with the complainant.

“She started with someone who never saw,” he said.

As Stephen continued his testimony, he identified the defendants by their numbers.

Stephen told the court that he saw Junior Charles come up to the cemetery with a stone and said, “You kill one and want to kill my mother.”

“That is when the others came up,” he said.

Asked who he was referring to, Stephens said “those who participated in fighting me. That is when they came up and started fighting.

“After that, I was crowded by people who were trying to protect me from them. I could not have recognised anything because I was crowded,” he told the court.

“I received lash from stones and sticks, where my brother and sisters were protecting me to get into the vehicle. I saw defendant number 5 (Padmore) come up with a large piece of stick after my family has tried (sic) to get me in the road. And he lashing me in my waist. I received damage to my eyes that I could not have seen; I was lashed in my head also with stone and blocks.”

He said he saw Thomas, Junior Charles, and Padmore hit him.

He said he saw Padmore hit him with a piece of stick and a stone and saw Daniel and Thomas hit him also.

Daniel had a concrete block in his hand, Stephen told the court, adding that the accused man also hit him with the block.

Stephens told the court that after the incident, he was rushed to the police station, where he was issued with medical injury form.

When the document was shown to the lawyers, Marks rose, saying that none of his clients or Lewis’ had been served with the document.

However, Samuel noted that the lawyers had come into the matter after all defendants had been served.

Stephen told the court that the incident at the cemetery lasted over half an hour.

At this point, Padmore indicated that disclosure was not made to him and he did not have a lawyer.

The prosecution said she was not objecting to the trial being adjourned at that point until Padmore is served.

However, the lawyers asked that Stephen conclude his testimony before the adjournment.

Stephen then told the court that he had had a chain around his neck and one of his assailants ripped it off, resulting in a scar.

He said that the day after the incident, when he went to return the medical injury form to police, he was escorted to the cemetery, where he was able to point out to investigators some of the stones and pieces of concrete blocks that were used during the assault.

The police collected them and took them back to the station and asked him to place his signature on them, Stephens told the court.

Stephens pointed out his initials on some stones and an 8’ concrete brick.

The hearing was suspended until July 12.

All of the men will be tried on all of the charges, some of them having reverted the guilty pleas they entered at their arraignment a year ago.

Daniel had initially pleaded not guilty to possession of an offensive weapon, to wit a stone, but had later told the court that he wanted to change his plea to guilty.

2 replies on “ID an issue as funeral attack trial begins”