Gonsalves wraps up 3-week trip with visit to Seychelles 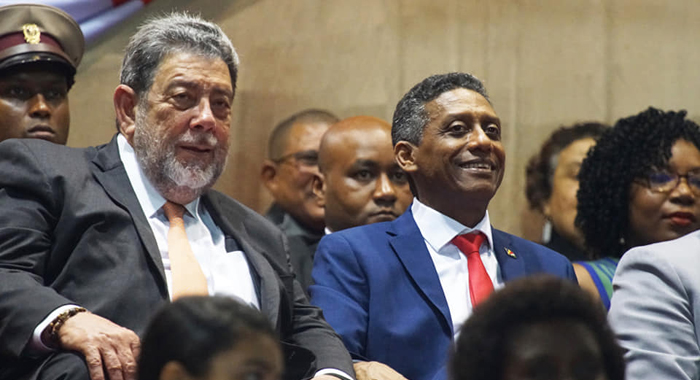 Prime Minister Ralph Gonsalves has wrapped up a two-day official visit to the Seychelles, which was among engagements that saw him spending almost three weeks outside of St. Vincent and the Grenadines (SVG).

The Office of the Prime Minister had said on June 13, when Gonsalves left SVG, that the prime minister would spend two weeks in the archipelago of 115 islands in the Indian Ocean, off East Africa, that is home to numerous beaches, coral reefs and nature reserves.

Kingstown had said that Gonsalves’ trip would have included a “stay over in London” during which Gonsalves was to meet with “several potential investors and will hold a town hall event for Vincentians in the United Kingdom”.

The office of the prime minister said that Gonsalves was accompanied by Jinelle Adams, Minister Counsellor in Office of the SVG High Commission to the United Kingdom and was slated to spend two weeks in Seychelles.

However, Minister of Finance, Camillo Gonsalves, said last Sunday that the prime minister, who is also his father, would only spend two days in the Seychelles.

The finance minister said the prime minister was “in Europe — most recently Italy — meeting with investors, including the Canouan investors”.

He said the prime minister travelled last Sunday, June 23, to the United Kingdom, “where he will (among other things) be meeting with members of the Vincy Diaspora and at least one U.K. Secretary of State”.

He said the prime minister will return to SVG on July 2, after “two nights, not two weeks” in Seychelles.

“Much as I’d like our hardworking PM to take a two-week vacation, this ain’t it,” the finance minister said.

Gonsalves was in the multi-island nation at the invitation of President Danny Faure. The two leaders met last September on the margins of the United Nations General Assembly in New York.

This visit coincided with Seychelles’ 43rd anniversary of independence from Britain, last Saturday.

Seychelles News Agency said that Faure said his country regarded its Caribbean counterpart as a great partner in its efforts to bring to the forefront of all global dialogues, the challenges faced by small island nations.

“Our island nations, although oceans apart, are linked by the powerful bonds of our shared history, our common language, and our strong cultural links. Your presence here today, excellency, is a true testimony of the warm friendship between our nations,” said Faure.

The Seychelles president said Seychelles and SVG are guided by the same values, deeply committed to democracy, the rule of law, peace and shared prosperity for our people.

“Moreover, as Small Island Developing States, we share the conviction that the natural beauty and environment of our countries are not gifts to be taken for granted, but precious resources that must be protected,” he added.

“We are convinced that through our continued engagements our countries will build upon firm foundations in areas such as sustainable development, climate resilience, the blue economy, and cultural preservation.”

Faure reiterated the commitment of Seychelles towards deepening the bonds of friendship and bilateral relations with St Vincent and the Grenadines.

The relations will focus on elevating cooperation to the highest level, through exchanges of expertise, people-to-people connections, continuous dialogue and more importantly working on common platforms to foster global solidarity on matters of critical importance.

In response, Gonsalves said: “I would like to reaffirm the commonalities that exist between our two countries and people. Islands are peculiar entities under one nation-state umbrella.”

He said that “in that context internally we have our map laid out in the 17 Sustainable Development Goals of the United Nations which we adopted in September 2015. You can twist them in or out…

“Almost everything that we do you can adopt that as an appropriate framework. One of those goals entices us to have a partnership with other countries. It is important that the ground rules laid in the charter of the United Nations:  quality of state, non-interference in internal affairs of other countries, engage in unilateralism, don’t try to use force, it is better for people to talk than fight are respected by every nation,” Gonsalves added.

The Vincentian leader said that in the globalised political economy, small island states have very unique problems and challenges and the circumstances forged within us manifest ideas, which we can bring to the table of international affairs. We can make an important contribution to global peace and shared prosperity,” Gonsalves said.