Mom, 79, forgives son who punched her in face 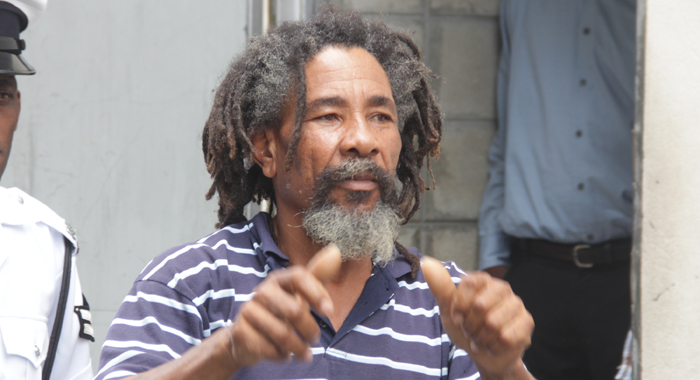 Brian King was to spend two weeks at the Mental Health Rehabilitation Centre, ahead of his sentencing. (iWN photo)

The Prospect man who was sent for two weeks of psychiatric evaluation before being sentenced for punching his 79-year-old mother in the face, has seen his hospital stay halved and a criminal proceeding against him ended.

Brian King, 51, was very likely to receive a prison term for the assault he inflicted on his mother Annie King, at their Prospect home on May 26.

On June 15, just as Chief Magistrate Rechanne Browne was about to sentence the man for the offence, his nephew, Rodney Small, who is Ms. King’s grandson and Mr. King’s nephew, told the court his family was concerned about Mr. King’s mental state.

In light of this information, Browne ordered Mr. King to undergo a psychiatric evaluation and ordered that he be brought back to court two weeks later.

However, the matter ended abruptly one week later.

Senior Prosecutor Adolphus Delplesche told iWitness News this week that Small had contacted him, saying that his grandmother had asked that the matter be given an early date.

He said Small told him that the situation was not sitting well with his grandmother, who was bemoaning the fact that her son was facing a possible prison term.

When the matter was called on June 24, the woman, who moves by shuffling even as she is supported, took the oath and told the court that she had forgiven her son and did not want to proceed with the matter.

As a result, the case against Mr. King was dismissed.

Mr. King had pleaded guilty to a charge that he assaulted his mother on May 26.

The facts of the case are that Mr. King lives with his mother, a retired businesswoman, at Prospect.

On May 26, about 5 p.m., they both got into an argument, in which Mr. King told his mother she was the reason that his sister in the United States had stopped talking to and sending money for him.

The woman told her son to be patient, saying that he “might end up getting more than me”.

The man then turned to his mother and told her, “I will give you yuh a f***ing cuff to blind yuh eye”.

She then admonished her son to show some respect, reminding him that she is his mother.

He then told her, “I will show yuh mother***t respect” and proceeded to box his mother in her left eye.

Ms. King then screamed, “My eye! My eye blind!”

Her son replied: “Yuh f***ing eye should blind so yuh be nyamming the s**t off the streets like a dog.”

He then cuffed her in the mouth.

On May 28, about 9 a.m., the matter was reported to the Calliaqua Police Station.

Mr. King gave police a statement admitting that he hit his mother in the mouth.

He was then arrested and charged.

The prosecutor had told the court that he was expecting a two-year prison sentence for Mr. King.

2 replies on “Mom, 79, forgives son who punched her in face”