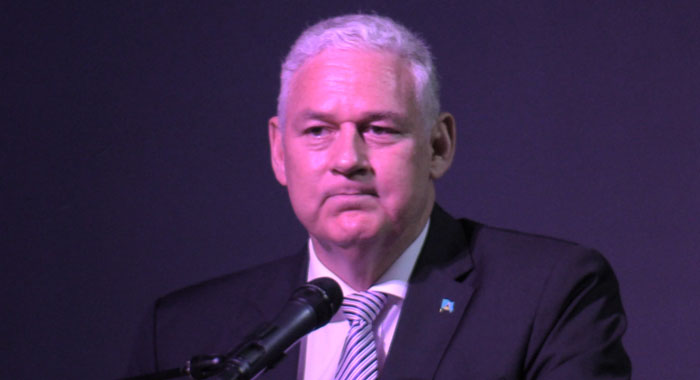 St. Lucia Prime Minister, Allen Chastanet speaking at the opening ceremony of the 40th meeting of CARICOM heads of government in Castries on Wednesday. (iWN photo)

St. Lucia has pledged to help St. Vincent and the Grenadines maintain its non-permanent seat on the United Nations Security Council and is urging other CARICOM countries to do likewise.

Speaking at the opening of the meeting of CARICOM heads of government in Castries on Wednesday, Prime Minister of St. Lucia, Allen Chastanet, who is the incoming chair of CARICOM, formally congratulated SVG on its Security Council election.

In June, SVG became the smallest nation — both in terms of landmass and population –to be ever elected to the UN Security Council.

Prime Minister of SVG, Ralph Gonsalves, has said that Kingstown will send six additional staff members to the United Nations and will have to have staff on call in Kingstown, when SVG takes up the Security Council Seat for two years, beginning next January.

Chastanet said SVG’s election “is another example of what can be achieved once there is firm resolve.

“All of CARICOM rejoices in this triumph; recognising that this is a golden opportunity for St. Vincent and the Grenadines to take on board the calls for reforms at the UN body,” he said.

The prime minister said that when St. Lucia was elected president of the UN General Assembly in 2003, “we received invaluable support from other CARICOM countries in maintaining that office.

“Understanding the importance of this new development, St. Lucia has pledged a contribution to St. Vincent and the Grenadines in maintaining and funding the office,” he said, repeating a pledge he made at a recent meeting of the Organisation of Eastern Caribbean States, of which SVG and St. Lucia are members.

“I am sure my colleague Prime Minister will not mind my saying that although this seat was won by St. Vincent, it is also a CARICOM success and we are behind you 100 per cent,” Chastanet said.

“Hence, I call on members to also pledge their support to St. Vincent in maintaining this office and ensuring a successful tenure.”

He said that for CARICOM, non-interference and non-intervention in the internal affairs of states, prohibition of the threat and use of force, respect for sovereignty, adherence to the rule of law, respect for the constitutional framework and democracy, and the right of people to self-determination are core principles which should not be violated.

“These are what we have to cling to in a world where international law and multilateralism are being undermined and small states are being increasingly marginalized,” he said in a speech in which he urged the bloc to maintain its position on the political situation in Venezuela.

“And despite whatever apparent differences appear in the ranks of CARICOM, I can assert that we all subscribe to these principles,” Harris said.

He said multilateralism ensures that “we, as small states, have a voice in the global arena.

“It is what makes it possible for our member state, St. Vincent and the Grenadines, to be elected to the most powerful body in the UN system, the Security Council, and to promote and protect the interests of the small and vulnerable states.

“Let us give a round of applause to the Government and people of St. Vincent and the Grenadines,” Harris said.

Harris also addressed the issue of security in CARICOM, which he said is a concern to regional leaders.

“… we must act urgently to fulfil the obligations to which we have signed on,” he told the 40th regular meeting of regional leaders.

Meanwhile, addressing the opening ceremony, UN Secretary-General António Guterres said that in addition to addressing the issues of resilience in the face of climate change, as Caribbean societies, we must address the issue of citizen insecurity.

“Murder rates in parts of the Caribbean are still very significant,” he said.

“Violence against women and girls is a significant dimension of citizen insecurity, which increases in the wake of natural disasters and is an obstacle to resilient societies generally.”

Guterres said he was, therefore, pleased that the Spotlight Initiative will be partnering with CARICOM and six countries in the region to invest some 50 million euros in prevention and redress for violence against women and girls.

“It is important that gender considerations underpin all our efforts to promote citizen security and sustainable development,” he said.