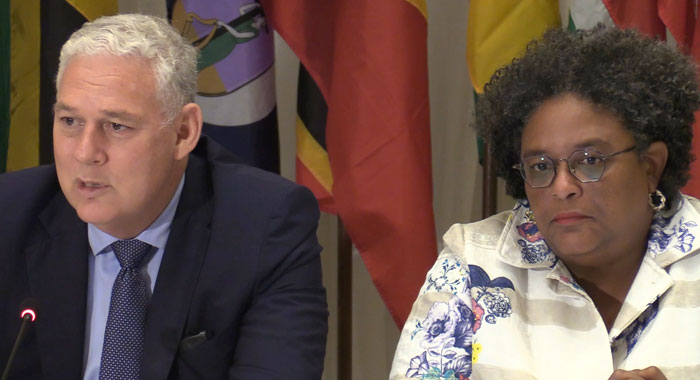 CASTRIES (CMC) — Caribbean Community (CARICOM) leaders ended a two-day summit on Friday confident that the groundwork is being laid for the continued development of the CARICOM Single Market and Economy (CSME) that they have long regarded as the region’s response to a changing global environment.

Barbados Prime Minister Mia Mottley, who has lead responsibility for the CSME, told the end-of-summit news conference that it is hoped that when the leaders meet in Bridgetown next February at their inter-sessional summit, there would be agreement on “a number of key aspects” of the initiative that allows for the free movement of skills, labour, goods and services across the 15-member grouping.

She said the leaders are hoping to push forward on the regional harmonisation of the stock exchange, the common investment policy among other initiatives, adding “this is the nitty-gritty of execution … that will give our citizens the comfort that they will want to have”.

Earlier, CARICOM chairman and host Prime Minister Allen Chastanet described the summit as “a most productive meeting” saying that it had been characterised by the “free flowing and frank discussions on the range of matters which were before us”.

He said as had been expected, issues relating to the CSME “were aired and we urged that as a matter of priority member states undertake the necessary action at the national level to complete the measures outlined in the implementation plan.

“We acknowledged the importance of timely reporting on our implementation actions and the challenges,”Chastanet said, noting “there is no doubt that as well we must enhance our efforts at public education and outreach”.

The St. Lucia prime minister told reporters that the regional leaders had a “good engagement” with representatives of the private sector, labour and civil society and that the private sector had made progress towards establishing the CARICOM Private Sector Organisation (CPSO) to interact formally with the regional leaders and to be designated as an associate institution of CARICOM.

“This is expected to be finalised by the end of the year. Its specific purpose would be to support fully the implementation of the CSME,” Chastanet said, adding that the regional leaders had also agreed to designate the Caribbean Congress of Labour (CCL) an associate institution of CARICOM and “welcomed its commitment to engage with the CPSO on the mechanism for its participation in that grouping”.

Chastanet said a matter of “deep concern” to the regional leaders is the continued blacklisting of some Caribbean countries by Europe, “which is a clear and direct threat to the economic and well-being of those countries and the region.

“We agreed to refine the CARICOM strategy on blacklisting,” he told reporters.

The meeting also discussed the ongoing political violence in Haiti, where the opposition forces are calling on President Jovenel Moise to resign amid allegations of embezzlement linked to the Venezuelan oil initiative, PetroCaribe.

Moise, who attended the ceremonial opening of the summit on Wednesday, did not participate in the deliberations, having left the following day.

Chastanet said a delegation of regional leaders would visit the French-speaking country “to inform ourselves of the situation in that country”.

He said in the discussions on Venezuela, where Opposition Leader Juan Guaido, with the backing of the United States, has declared himself the interim president of the South American country, CARICOM has reiterated “the importance of resolving the crisis peacefully through dialogue between the parties.

“We also agreed with that the mediation related activities would be continued to be pursued by the Prime Ministers of St. Kitts-Nevis, Barbados and Trinidad and Tobago as designated by conference at its 30th inter-sessional meeting,” Chastanet said, adding “we expressed our support for the facilitation process being carried out by Norway with both sides of the dispute”.

The CARICOM chairman also told reporters that the regional leaders had “a very fruitful” meeting with Norway’s Prime Minister Erna Solberg, saying “we discussed issues of concern to the Community, such as concessional financing to build resilience, climate change, the environment and the sustainable ocean economy, in particular with respect to marine pollution”.

He said that Solberg indicated that she appreciated the region’s position on the issues and supported them in large measure.

“We felt that these high level sessions presented an opportunity to advocate for several issues of interest to member states, particularly climate change, financing for development and sustainable development,” he said, adding that Guterres has committed his organisation “to taking steps it could, to improve access for small island states to development financing as a priority.

“He also declared that eligibility for official development assistance should include vulnerability criteria which is very much in sync with our position,” Chastanet said.