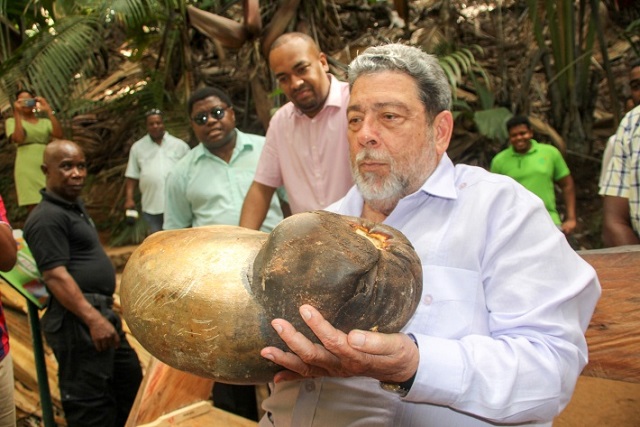 Prime Minister Ralph Gonsalves is pleased with his June 28-30 official visit to Seychelles, an archipelago in the Indian Ocean, at the invitation of that nation’s president, Danny Faure.

“Oh, it was a wonderful visit,” he told iWitness News in St. Lucia on Thursday, on the side lines of the two-day CARICOM heads of government summit, taking place here until today (Friday).

Gonsalves said he went to Seychelles because it is a small island state, which, like St. Vincent and the Grenadines, share common problem globally.

The prime minister noted that Seychelles is part of the African Union, adding that like the rest of the bloc, it was strong supporter of SVG’s Security Council bid.

Last month, SVG became the smallest nation in terms of landmass and population to be elected a non-permanent member of the United Nations Security Council.

Kingstown will occupy the seat from January 2020 to December 2021.

“I have developed relationship with the president,” Gonsalves said, adding that he had been invited previously to visit but was unable to make it.

“So it was really to establish, as a Caribbean country, a presence in the Indian Ocean really,” he said of the visit, which coincided with independence celebrations in Seychelles.

“You wouldn’t believe the impact. I mean, I am driving through the streets of Victoria, which is the capital city in Seychelles, and all about, you see photographs of Ralph, you see welcome signs and as the convoy pass, ordinary people in the road are waving their hands and shouting.

“Because Seychelles, I mean where they are in the Indian Ocean, I mean they have a few other territories but they are not so close by,” he said mentioning Comoros, Mauritius, and Maldives.

“But we are the first country from the Caribbean which went,” Gonsalves said.

Meanwhile, on Thursday, the Seychelles News Agency published what it says are the seven highlights of the prime minister’s visit.

They are as follows:

1. Shortly after his arrival, the prime minister proceeded to State House in the capital Victoria where there was a welcoming ceremony and inspection of a guard of honour. Gonsalves was also introduced to the cabinet of ministers.

2. Gonsalves met with President Faure and discussions focused on strengthening bilateral relations for the mutual benefit of the two island nations. After extending a warm welcome to Prime Minister Gonsalves, Faure reaffirmed the Seychelles’ commitment towards establishing and reinforcing cooperation in a multitude of sectors.

3. As is customary for leaders on state visits to Seychelles, the prime minister visited the Botanical Gardens in the central Mahe district of Mont Fleuri where he planted a coco de mer seed in honour of his visit. Accompanied by the Minister for Environment, Energy and Climate Change, Wallace Cosgrow, and other high officials, Gonsalves toured the garden, which is one of the main tourist attractions in the capital Victoria.

4. On Friday evening, President Faure hosted a cocktail reception for Gonsalves. The Gonsalves reaffirmed the commonalities that exist between the two countries and people.

“In this globalised political economy, Small Island States have very unique problems and challenges and the circumstances forged within us manifest ideas which we can bring to the table of international affairs. We can make an important contribution to global peace and shared prosperity,” Gonsalves said.

5. On Saturday morning, Gonsalves travelled to Praslin, the second-most populated island to visit the Vallée de Mai — a Seychelles’ UNESCO’s world heritage site. As is the tradition, the prime minister had the chance to guess the weight of a 14.9 kg coco de mer — the world’s biggest nut endemic to Seychelles.

After visiting Vallée de Mai, Gonsalves expressed his amazement about the beauty of the nature reserve. “This is an extraordinary work of nature. I’ve never been to anything like this. I have travelled all over the world but this one has a uniqueness. The beauty of the palms, its magnificence and the coco de mer is simply unique. And the hills are really joyful together.”

6. The highlight of Gonsalves’ visit was serving as guest of honour at the Seychelles’ 43rd Independence Day anniversary and National Day celebrations on June 29. The day was commemorated by several activities including a military parade at the Unity Stadium at Roche Caiman a central district on the main island of Mahe.

7. Gonsalves left Seychelles on Sunday 30 June and at end of his two-day state visit, he said, “I enjoyed it very much. Last night (the national celebration show) was splendid. I was very impressed by the young people with their skills and talents. And I understand a young person put the show together. I have to congratulate that individual. It was absolutely superb and I enjoyed Praslin.”