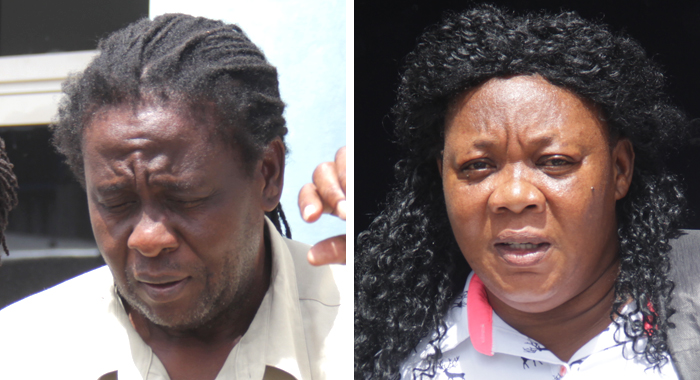 Sealey Matthias, left, was initially jointly charged along with Francella Thomas in connection with the firearm and ammunition found in Arnos Vale. (iWN photos)

A male-female duo of Arnos Vale has been ordered to appear before the Serious Offences Court on Thursday in connection with gun and ammunition charges.

On Wednesday, at the Kingstown Magistrate’s Court, Sealey “Mikey” Matthias, 56, pleaded guilty to a charge that, on July 7, at Stubbs, he had in his possession one Smith & Wesson .40 pistol, serial number unknown, without a licence.

He was also charged that on the same date and at the same place, he had in his possession 10 rounds of .40 ammunition without a licence.

He pleaded guilty to both charges.

Senior Prosecutor Adolphus Delplesche asked that the matters be adjourned and transferred to the Serious Offences Court for facts and sentencing on Thursday.

Delplesche asked that Matthias be denied bail and his lawyer, Michelle Fife, did not object.

Further, Matthias was jointly charged along with Francella “Fatty” Thomas, 52, that on July 7, at Arnos Vale, they had in their possession, a 12-gauge shot gun, serial number, W715154 without a licence.

They were further charged with nine counts of possession of ammunition without a licence.
The accused are alleged to have had in their possession 396 rounds of ammunition.

They pleaded not guilty to all 10 charges.

In relation to Matthias, the senior prosecutor said he was objecting to bail as the man was on remand in connection with the guilty charges.

Delplesche said he could not object to bail for Thomas, but asked the court to demand sufficient surety and impose a reporting condition of twice per week.

Senior Magistrate Rickie Burnett granted Thomas composite bail in the sum of EC$15,000 with one surety.

He ordered that she report to the Central Police Station on Mondays and Fridays between 8 a.m. and 8 p.m.

Counsel Fife, who also represents Thomas, told the court that the accused woman has assets worth EC$15,000 and asked that she be granted bail in her own recognisance in that amount.

Burnett said he would grant the lawyer’s application, pending the provision of the requisite documentation.

However, when the court adjourned around 1:30 p.m., the woman’s bail had not been processed and she was taken away, along with other prisoners, in a prison vehicle.

One reply on “Arnos Vale duo charged for gun, 396 rounds of ammo”