Being inside casket was ‘scary’ — Shaunelle 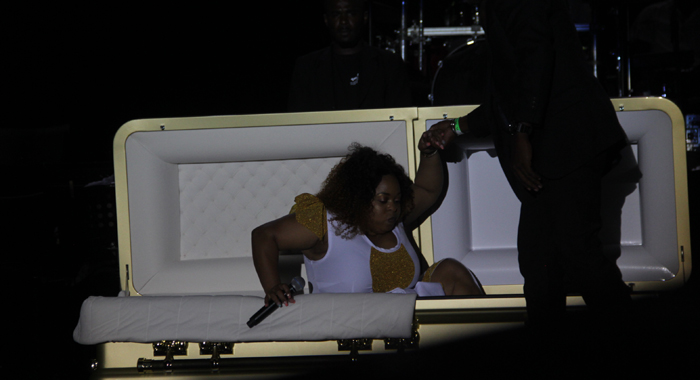 Shaunelle McKenzie is assisted out of the casket at Dimanche Gras at Victoria Park. She went on to capture the calypso crown. (iWN Photo)

Have you wondered how calypsonian Shaunelle McKenzie felt being inside a closed casket on stage Sunday night?

“Somebody asked me that, actually, backstage. I said, ‘It was hot. It was just hot’,” she told iWitness News shortly being crowned National Calypso Monarch 2019.

McKenzie, who won the crown after 17 years of trying, said being inside the casket was “scary”.

McKenzie’s props for her song “Crown Me Now” included a video of her lying in a casket, at a mock funeral.

During the live show, she was also brought on stage in a closed casket.

“I was so nervous, like even shooting the video in the coffin was very nerve-wracking for me, like lying in there, I am like, ‘Oh my god, I’m in a coffin,” she said and laughed.

“It’s something I don’t think I will ever do again. Not until the time comes, at which point, I won’t know what’s happening any way. But yeah, never again while I am alive.”

McKenzie has been in the calypso art form for 26 years, during which she captured eight Junior Calypso Monarch titles.

However, the senior crown continued to elude her until this year, when she won both the Queen of Calypso and the National Calypso Monarch titles.

iWitness News noted that Man Zangie often has some very elaborate presentations, although that category of the competition only carries 10 points.

McKenzie, who, like Man Zangie, is a member of Upstage Experience Calypso tent, said:

“If you think you need to go big to take you there, then go big…

“Over the years, I have not gone big. I think this year was one of the years that I have gone that big, to be honest.”

The artiste said she is not big on props.

She, however, said this is a balancing act.

“If it is too much, it would take away from what you are trying to say to your audience. It can take away, but to each its own. If you think it is gonna work for you, then go right ahead. If not, then you go simple then you go big.”

4 replies on “Being inside casket was ‘scary’ — Shaunelle”