‘Tonight, I shocked people with a change [of] key in my first song…’ 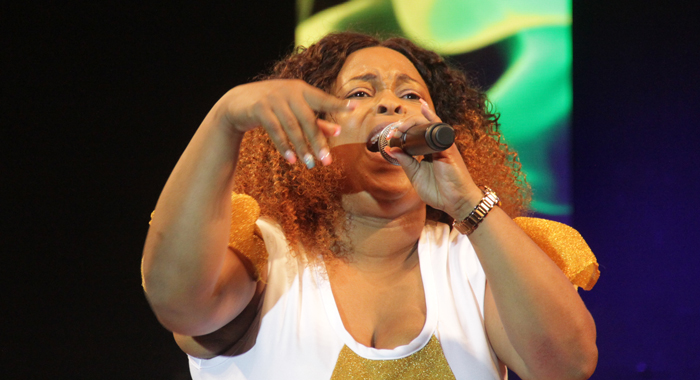 Shaunelle McKenzie finally got through to the judges in the National Calypso Monarch competition last Sunday. (iWN photo)

The judges in the National Calypso Monarch finals at Victoria Park Sunday night responded to Shaunelle McKenzie’s demand to “Crown Me Now” and awarded the bard the national title, which she had been pursuing for 17 years.

Sunday’s crown was Shaunelle’s second ever in a senior competition, having won the Queen of Calypso competition in late June, after placing second in 2018, when the show was reintroduced after 15 years.

In two powerful presentations Sunday night, one of which included changing the key in which she sings, Shaunelle decimated her tent-mate, Zamfir “Man Zangie” Adams, proving that greater emphasis on singing, rather than presentation, still remains the key to winning, and sending the defending monarch into second place.

Shaunelle unnerved herself and some patrons when she came on stage in a closed casket, carried by “pall bearers”, something she said she might never do again for the rest of her life.

Even as the casket was brought on stage, the video on the big screen showed a “funeral” for the artiste, which included the mournful singing of the hymn “It Is Well With My Soul”, a song that today still conjures up images of death that inspired it 140 years ago.

“Dear friends and family, we are here, this evening to celebrate the life of our dear, beloved friend, Shaunelle McKenzie,” the “celebrant” said at the “funeral”.

“Shaunelle McKenzie is a notable performing artiste in the calypso and soca arena, who has made significant contribution to the art form. At this time, we will welcome a few of her friends who will give tribute.”

A woman’s voice then gave tribute, saying she remembers Shaunelle’s first calypso show and her contribution to the art form.

As the music struck up, the casket is opened and Shaunelle emerges, declaring, “Ah not gone yet.”

The song chronicles her experience in the calypso art form, saying “ever since I was small…  I won and I lost but I kept fighting ‘cause giving up was not part of my plan”.

She, however, said, “my arrangements sweet and my topics they’re always biting, but every year ah failing to become queen in this land”.

“Crown me now, don’t wait to present me family with awards posthumously when ah gone”, said Shaunelle, who has won eight junior calypso crowns, a record in St. Vincent and the Grenadines.

She also called for her crowning now, rather than when she is “old and grey, blind, or deaf, or in a wheelchair, or can’t hear a word ah praise for me hard work

Shaunelle said she did not want to hear about “paying dues in a kaiso sue-sue” because  “I am a true kaiso queen”.

She told the audience that she has never tried picong, but was trying it at Sunday’s show, just before she went to sing, “Doh tell me do like Ipa, write a whole song bout Zangie, I am a true kaiso queen”.

She was referring to former monarch, Grantley “Ipa” Constance, whose song this year, which got him as far as the semi-finals, was about Man Zangie and his winning strategy.

Zangie, a four-time monarch, sang “First Priority”, a song in which he reminded politicians that their first obligation is to the people, and “Born For This”, a composition in which he responded to critics of his style of calypso.

“So all who trying to fight me, ah want all ah dem to know, Man Zangie was born to Sing Calypso,” he sang.

Chief among those critics, it seems from Zangie’s presentation, was Ipa, whom he did not identify by name, even as he said “some calypsonians hyper and jealous-minded to the core”, saying that “with everything that’s going on, they throwing picongs at me”.

This is also a criticism repeatedly levelled at Zangie, with some calypso lovers saying he sings about safe topics and avoids political commentary, even as his song, “First Priority” was a tepid departure from that trend.

Some patrons felt that in responding to his critics, Zangie over emphasises his singing, and shouted his words at some points, causing him valuable points.

Robert “Patches” King with “Yard Boy” and “Stand Up and Fight”, while Shena Collis was fourth, with “Queens” and “Never Say Never”.

The presentation began with a skit in which a preacher, who spoke with a southern United States accent, congratulated his congregants for having not gone to the Soca Monarch show.

As they are about to sing a hymn, one of the members, a man, stands up and asked the pastor, “Why can’t we go out into the communities, like Sharpes and Ottley Hall and spread the good word?”

“Go out into the community?” the pastor responds, “do we look like colour fete? No, we are the church. We are supposed to praise the lord in the church.”

The pastor then tells the members that if he does not feel comfortable praising the lord “in the church, then maybe you need to seek your salvation elsewhere, son”.

The congregation applauds in response to the pastor and the man walks out and the pastor dismisses the service, telling congregants to remember to “leave your offering in the back”.

At the end of the 2-minute skit, the music strikes up and Shaunelle continued the church theme, greeting the congregation, “Good night ladies and gentlemen of this congregation”.

In a scathing criticism of the church, Shaunelle said  “prophesying hope, “religion’s now a joke, some making a mockery”

In the chorus, she asked to be told “what role does Anglican, Catholic, Pentecost[al] play in society today, for what do they gather Sundays and pray?

“What impact do they really have on society ‘cause crime is skyrocket in this country, youths don’t give a damn ‘bout authorities.

“Till yuh could stop preaching from the pulpit and walk the streets just like Paul and preach, yuh singing to the same old choir, the masses your sermons don’t reach.”

‘I am ready to enjoy carnival now’

Speaking to reporters shortly after her crowning, Shaunelle said:

“I am so happy right now. I am relaxed. I am ready to enjoy carnival now because my hard work has finally paid off and it’s just excitement.

“Queen of calypso was my first crown in 17 years. You don’t even know how that feels,” she said.

The experienced singer said she put a lot of strength on her vocals.

“Tonight, I shocked people with a change [of] key in my first song, which I have never done that for the entire season with that first song and I think that did it.

“The second song was a bit personal for me, in that I gave my writer that idea after I didn’t win the Queen of Calypso [last year]. I actually gave that idea off of emotions and it paid off for me in the end. It really worked for me this year and I am really, really happy about that.”

Shaunelle, however, said she was “surprised” by her victory.

“I didn’t even know how to feel but I know I worked hard, I know ah sang my heart out and I put a lot of effort; it’s just years, after years of trying and disappointments and finally,” she said, as she began to sob.

Shaunelle’s songs were written by Chrystal Cummings-Beckles, a Barbadian who has been writing for her for the last four or five years.

She said that when she gave her writer, last year, the idea for what became “What Is Your Role”, St. Vincent and the Grenadines had seen a lot of cases of rape and children being molested.

“But it was basically me asking myself why aren’t we hearing the Christian community more as it relates to crime, children being molested, violence against women… And that’s where the idea came from for that whole song.

“We have a really, really good working relationship because she understands what I want to do in terms of vocals and topics and melodies and she is awesome,” Shaunelle said.

One reply on “After 17 years, Shaunelle reigns (+Videos)”