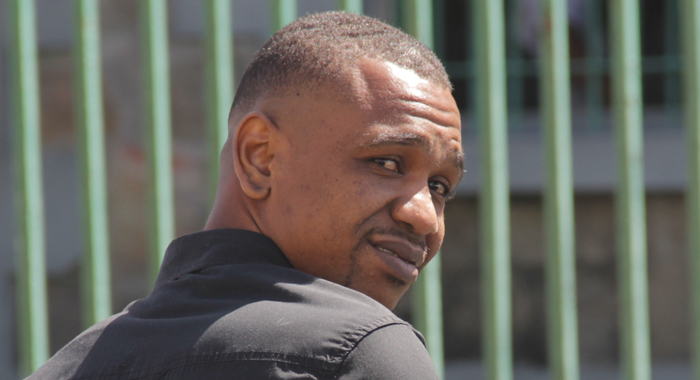 Branson George on his way back to prison after his sentencing on Thursday. (iWN photo)

The unlicensed driver who fled the scene after crashing a car into three members of a family, killing one of them, will have to spend a further three years and 10 months in jail.

On May 8, 2016 — Mother’s Day — Branson George, of Old Montrose, who did not have a driver’s permit, borrowed a car from a friend to go from his home village to the neighbouring community of Green Hill and back.

At the sentencing at the High Court on Thursday, Justice Brian Cottle noted that such a journey would only take a few minutes to drive carefully from one point to another.

“The prisoner at the bar did not drive carefully,” Justice Cottle said.

He said that Branson apparently lost control of the vehicle, accelerated suddenly and swerved unto a sidewalk where he struck three pedestrians.

The vehicle then went on to strike a wall at the side of the road before turning 180 degrees, to face the direction from which it had been coming.

The three pedestrians were members of one family.

Karl Roberts died within days of the accident, while his common law-wife Michelle Shearman and their son, Adam Roberts, were injured to the extent that Shearman requires assistance when walking.

After the accident, George fled the scene without helping his victims and pressured his friend to accept responsibility for the accident.

During his trial, he maintained that he was not the driver of the vehicle.

However, the jury did not believe him and returned a guilty verdict on both counts of the indictment, namely, causing death by dangerous driving and driving without a permit.

In mitigation, George told the court: “I would like to compensate the victims.”

He said that he was very sorry for what happened, adding, “putting me in jail … ah can’t compensate them”.

He further told the court that if incarcerated, he won’t be able to “help myself to help them”.

“Ah very sorry for what happen; very sorry,” he said, adding that he looks out for his siblings and provides for their needs.

The judge, citing the rulings in other cases, noted that one had said that the starting point for death by dangerous driving should be prison.

He said he chose a benchmark of four years.

He said the aggravating features of the case are that George fled the scene without attempting to help those he had injured, did not have a driving permit, tried to pressure his friend to accept responsibility for the accident, and showed no remorse for his actions.

Police investigation showed that George was never the holder of a driver’s permit.

The judge said he found no mitigating features in the case.

George has previous convictions for wounding and unlawful possession and use of a firearm.

Justice Cottle said this suggests little regard for abiding by established legal norms.

The judge said that it was only after his conviction that George accepted responsibility for the accident, expressed a desire to apologise to his victims, said that the offence was not premeditated and that the brake had failed.

The judge also noted George’s compensation offer, but said that his recent attitude had come far too late in the day to affect the sentence.

He moved upward from the starting point of four years to five years in prison.

George had been in prison since May 16, 2018 and would, therefore, spend a further three years and 10 months in prison.

The judge also disqualified George from holding a driver’s permit for at least five years and ordered him to pay the maximum fine of EC$2,500.

Justice Cottle did not set any timeline for the payment of the fine.

He, however, said if the fine is not paid, George will serve one year in prison, consecutive to the other sentence.

The judge reminded George that he is still a young man and may still wish to make some amends for the harm he has caused.

George did not have a lawyer in the case. Karim Nelson and Rose-Ann Richardson appeared on behalf of the Crown.