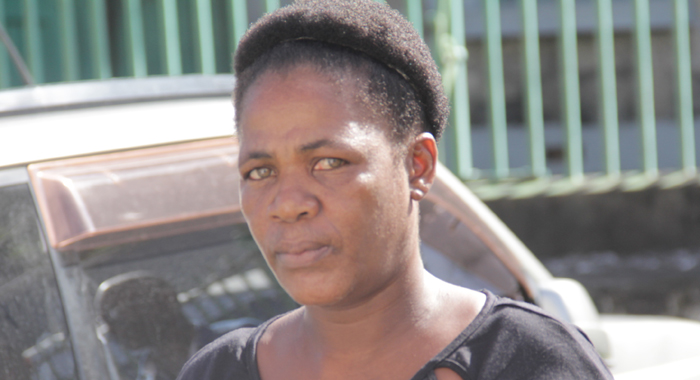 Christine Dublin as she walked from the prison to the court for her sentencing hearing on Thursday. (iWN photo)

A mother of four was, on Thursday, jailed for six years for a knife attack on her former lover, who wonder why she had taken the blame to protect her current partner.

Christine Dublin, aka “Lynn”, 46, of Brighton, cried as she begged High Court judge Justice Brian Cottle not to send her to prison for her crime.

“Sorry for my action. It is not something–” Dublin said before beginning to sob.

She told the court that she had never gotten herself in trouble before and asked to be pardoned.

“I really want to go home and meet my children… I promise that I will never get myself in this type of trouble,” said the woman who was found guilty of inflicting almost 30 stab wounds on her former lover.

She said that after a month in prison she has “learnt a lot in that space of time. I don’t think it is somewhere I want to be.

“To tell you the truth, I am really sorry,” Dublin told the court.

Dublin was charged jointly with her common-law husband, Marcus Arthur, for wounding her former partner, Glen Harry, the father of three of her daughters.

Arthur was acquitted after a full trial and Dublin was convicted of the offence.

On May 7, 2016, Harry attended an event at a nightclub, at which Dublin and Arthur were also present.

An incident occurred, which resulted in Harry complaining to the police who were there providing security that he felt harassed by Dublin.

Later that same evening, Dublin also told the police at the event that Harry was harassing her.

In the early hours of the following morning, as the dance was ending, the police responded to a report that a man and a woman were killing a man nearby.

The police responded and found Harry lying on the road with multiple stab wounds.

One of the police officers who responded said that Dublin had said she wished that Harry had died because he would not stop harassing her.

However, Harry, in his testimony, told the court that it was Arthur who had inflicted the stab wounds while Dublin restrained him.

Harry was hospitalized and survived multiple wounds to his back, torso and face.  Some of the wounds had been regarded as life-threatening.

In handing down his sentence, Justice Brian Cottle noted that the offence carries a maximum sentence of life imprisonment.

The judge, citing the Court of Appeal ruling in the case of Jabari Charles against the Crown, used a starting point of 10 years in jail.

He said the aggravating features are that weapons were used and that Dublin had brought those weapons to the nightclub.

He pointed out that she did not act alone and that the crime was committed in a public place in full view of several persons.

“I find no mitigating features in this case,” Justice Cottle said.

Regarding Dublin’s personal circumstances, he noted her age and the fact that she had four daughters, ages 12 to 19.

The judge said it was said that Dublin did not benefit from a secondary education, as her family did not have the means to do so when she passed the Common Entrance Examination.

A social inquiry report had also shown that at age 12, Dublin had been the victim of a horrific assault by three men.

The judge said that given the limitations of the system in St. Vincent and the Grenadines, it was unclear whether she had received counselling to help her deal with the psychological trauma of her experience.

The report also showed that Dublin endured a far-from-smooth 13-year relationship with Harry, during which she abused alcohol to try to cope.

During that time, she had been the victim of much physical and psychological abuse at the hands of Harry and had started a new relationship in an attempt to move on with her life.

Dublin had no previous convictions and residents of her community said she is a caring mother who does the best for her children in challenging circumstances.

They say she might have lost control on the night of the incident.

Prison authorities say that Dublin is a good candidate for rehabilitation.

The judge began with a notional sentence of 10 years, but moved upwards by two years, because of the aggravating feature.

Having taken account of Dublin’s personal circumstances, including the abuse she had suffered over many years and the fact that the consumption of alcohol that night might have weakened her self-control, the judge moved downward by six years.

Rose-Ann Richards appeared for the Crown. Dublin was unrepresented.