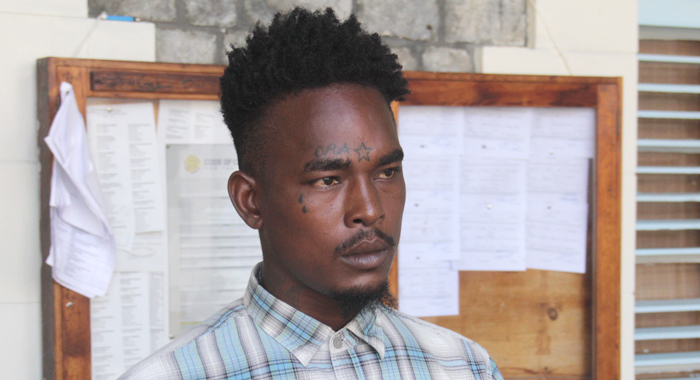 Aswell Andrews must pay his victim EC$10,000 within six months or go to prison for eight years. (iWN photo)

The High Court, on Thursday, ordered a 31-year-old man of Byera and Georgetown to compensate a Chester Cottage man for injuries he inflicted on him during a cutlass attack in 2015.

After hearing from the complainant, Sean Mack, High Court judge, Justice Brian Cottle ordered Aswell Andrews to pay him EC$10,000 within six months or go to prison for eight years.

The judge made it clear that Andrews’ sentence is suspended for six months on condition that he pays the virtual complainant and that he would have to serve the prison sentence if he fails to do so.

He said any resulting incarceration would not be a penalty for failure to pay the compensation but a breach of the condition under which the sentence was suspended.

In mitigation, Andrews told the court that he was sorry for his actions and asked for forgiveness.

“Sorry to Sean Mack for what I did to him,” he further said, and told the court that he was willing to compensate his victim.

Mack, 33, who was in the courtroom, was called to the dock and the judge noted Andrews’ offer of compensation.

“Me and he done settle that,” Mack told the court.

Andrews was being tried recently for wounding with intent when he threw in his hand and pleaded guilty after hearing the evidence of the complainant and another witness.

The facts of the case are that Mack, 33, of Chester Cottage, was at a shop in his village on Feb. 14, 2015, playing dominoes with three other men when the attack occurred.

Andrews entered the shop behind Mack and struck him a blow to the shoulder.

When Mack looked around, he saw Andrews with a raised cutlass.

Mack raised his hands in an attempt to fend off the attack and received a chop wound, which resulted in him having to undergo surgery twice.

The man spent five days in hospital in the first instance.

As a result of his injury, some of Mack’s left fingers are permanently bent.

In handing down his sentence, Justice Brian Cottle noted that the offence carries a maximum sentence of life imprisonment.

He considered some cases that have come before his court, including the March 2019 case of brothers Kevin and Javiss Chance, in which he had used a starting sentence of 12 years in prison for attempted murder.

The judge applied the same benchmark in the case.

He said that the aggravating features were that an offensive weapon was used and said weapon was brought to the scene.

Justice Cottle pointed out that the attack was sudden, premeditated and unprovoked, and occurred in a public place in broad daylight.

As a result of the attack, Mack is not as employable, Justice Cottle further pointed out.

He said that the mitigating factors are that Andrews had pleaded guilty, albeit belatedly, had shown remorse for his actions and had offered compensation to his victim.

The court further pointed out that he was 26 years old at the time of the incident, but noted that he had previous convictions in the magistrate’s court for wounding and assault and threatening language.

The judge said he is of the view that conduct such as Andrews’ should always attract a custodial sentence, but noted that the convicted man had expressed remorse and had expressed a willingness to compensate his victim.

For the guilty plea, the judge granted Andrews a 20 per cent discount on the notional sentence of 10 years.