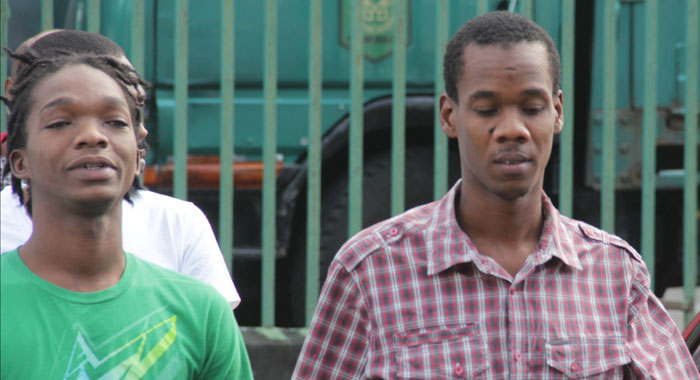 Two Campden Park brothers were, on Friday, jailed for just under 13 years for a cutlass attack that illustrates the legal principle of joint enterprise.

Kevin “Nose” Chance, 27, was sentenced to 12 years 10 months and one week in prison while Chance, 25, will spend 12 years and 10 months behind bars for their roles in the attack six years ago.

The men were found guilty on Feb. 21, 2019 of attempting to murder Omar Letteen at Campden Park on June 18, 2013 and wounding him with intent during the same attack.

Both Kevin and Letteen were minibus conductors and on the day in question, they were each at the Leeward Bus Terminal in Kingstown trying to persuade commuters to travel with their respective minibuses.

An altercation ensued and afterward, they both continued to work and it appeared that the conflict had ended there.

However, later that evening, Letteen was at the bus stop in Campden Park when he saw Kevin running towards him with a cutlass.

Javiss, a carpenter, was with his older brother.

Letteen ran to a nearby shop where he had just left the driver of the minibus on which he worked.

The Chance brothers pursued him into the shop.

In the presence of the shopkeeper and another patron, Javiss held Letteen in place while Kevin administered several chops with the cutlass.

Letteen received injuries to his neck, upper arm, middle arm, and hand, as he tried to fend off the weapon that Kevin was using.

The shopkeeper’s screams attracted the attention of the minibus driver who was not far away.

The driver intervened and was able to wrestle the cutlass from Kevin.

Javiss tried to get it back from the driver but did not succeed.

The brothers then ran from the scene.

The third and fourth fingers of his left hand were partially severed.

“These were severe injuries,” the judge observed.

Javiss was unrepresented, and Kevin was represented by counsel Grant Connell

In mitigation, Javiss told the court that he was very sorry for committing the offence and asked the court for leniency.

He told the court that he has a 6-year-old son who is looking forward to seeing his father and whom he supports all the time.

“I have my mother who suffered with nine of us for a very long period of time. My lord, with due respect, my honour, I’m asking that if you can possibly charge me a fine.”

In mitigation, Connell noted that Kevin was 21 at the time of the incident and is now the father of two boys, ages 5 and 2.

He said Kevin has no previous convictions and expressed “extreme remorse” for his actions because the virtual complainant was once his friend.

“He buy a shoe, the virtual complainant get a shoe. That’s how close it was,” Connell said.

Connell said that Letteen suffered injuries, which he described as “cuts about the upper body” that were not life threatening and resulted in him spending a week in hospital.

He said that according to the doctor’s evidence, moderate force was used to inflict those injuries.

The evidence is that Kevin once held the weapon above his head with Letteen in front of him, Connell said, adding that this indicated Kevin’s unwillingness to cause significant injury to Letteen.

He added that from the evidence, the actions of Letteen in the shop, in terms of his proximity to bottles, which are potential weapons, caused Kevin to act as he did.

Connell said that this client was by no stretch of the imagination a hardened criminal.

He said he was the main breadwinner and “the clanging of metal doors” will not have the desired effect on a young man “with this type of mind set”.

He said that his client has demonstrated during the years he spent on bail that he is capable of acting in accordance with what the society expects.”

Connell said that Letteen is no longer in the society, having migrated to Turks and Caicos Islands.

The lawyer said his client is a good prospect for rehabilitation.

Connell said that while he appreciates that Letteen suffered injuries and is now in a position of pain, the victim impact statement “is blown out of proportion for the purposes of influencing this court or trying to indicate to this court that a severe sentence would be the only remedy”.

He, however, pointed out that in the report, Letteen says that he was impacted financially by the incident and that the hospital bill is yet to be paid.

He submitted that a suspended sentence be imposed on his client, noting that Kevin had no antecedents.

“He has never gone before another court, he is employed and he maintains his children. That’s another crucial factor this court must take into consideration, especially in this society where some men think they are just sperm donors. Donate the sperm, leave the institution. He is not one of those although he grew up in a house with a single parent, without a father. He does not wish this on his child.”

Connell asked the court to give Kevin the opportunity to speak to the child and tell him that his own actions were wrong and that is what his father could have faced.

“Let him have the voice of a father. There would be no travesty of justice,” Connell said, adding that coupled with this, the court can impose compensation so that Letteen can be helped to live a normal life if he gets therapy.

He said that the final paragraph of the report suggests that rehabilitation and a return to the society would not be detrimental to the society and a custodial sentence would have a corrosive effect on Kevin and his family; he asked that justice be tempered with mercy.

In handing down his sentence, Justice Cottle said the aims of criminal punishment — retribution, deterrence, prevention and rehabilitation — have to be kept uppermost in mind.

The maximum sentence for attempted murder is up to life imprisonment, he said, adding that in the recent case of Lenny Baynes — who was sentenced to 46 years in jail for various crimes, including two counts of attempted murder — the starting point was 12 years.

The reason he used 12 years as the starting point was that manslaughter, a similar offence, that attracts a maximum penalty of life, has a benchmark of 15 years.

He said that although attempted murder is a serious offence, there is no loss of life.

The judge noted that the attack was by two men and carried out in a public place in the presence of others.

He added that a deadly weapon, which the brothers brought with them, was used, showing some degree of premeditation.

He further pointed out that multiple blows were essayed with the cutlass and despite the intervention of the bus driver, the brothers still struggled to continue their assault.

In terms of the impact on the victim, the judge noted that he is permanently affected and has lost the full functionality of his left hand, despite the best efforts of the surgeon and physical therapist.

Justice Cottle said that also aggravating, in his view, was the fact that the act followed an earlier incident and smacks of a level of revenge.

He said that apart from the age of the prisoners at the time and the fact that the earlier altercation may have some degree of provocation, there are no mitigating features.

Justice Cottle said Kevin was somewhat cooperative with the police and is the father of two sons, to whom he has been an excellent father.

“It is my understanding that his elder son is constantly asking for his father to come home.”

The judge said that Kevin did not complete his secondary education but, despite that, has been doing his best to provide for his family from his earnings as a bus conductor.

The judge said that there was a suggestion that Letteen had made some remarks that Kevin found to be so offensive that he retaliated as he did.

The caseworker who prepared the report saw Kevin as a good candidate for rehabilitation.

Javiss was 19 years at the time of the attack and played a lesser role in that he was not armed and did not administer any blows.

But, at the time of the offence, he had one previous conviction. Since then, he had found himself convicted for several offences.

He is the father of one child and at the time of the offence was employed as a carpenter at a business enterprise owned by his uncle.

Even during the interview prepared by the caseworker, Javiss continued to deny responsibility for his action.

He accepts that he was present but denies harming the victim

The court also considered the impact on the victim

Letteen said that the attack has left him, physically mentally and financially affected.

He finds it difficult to forgive his assault because even after the bus driver had stopped them, they continued to struggle in their quest to inflict further, and perhaps life-ending, injuries and still have not expressed to him any remorse.

For a long time after the incident, Letteen lived in fear that the brothers would return and complete what they started.

His relationship with his then girlfriend suffered and she left him, and he thought that this was in part because of his physical disability.

He said that he felt compelled to leave SVG in an effort to recover his mental equilibrium.

The most serious continuing injury is to the fingers on his left hand, which have been partially severed.

He still cannot use that hand properly, his fingers still hurt, he experiences severe cramping especially when it rains or is about to rain and he constantly has to use a ball to exercise those fingers to lessen the severity of the pain and increase the range of motion in his hand.

He has altered his wardrobe, the clothes that he wears, so as to hide his unsightly scars, especially from his nephew.

The attack caused him to lose his job as a conductor and he then had to once again depend on his mother for financial support.

The physical therapy, which he needed, is expensive and he could not afford the full course.

The stay at the hospital resulted in bills that remain outstanding.

“He feels that the prisoners have sentenced him to a lifetime of pain and suffering,” the judge said.

The judge began with a notional sentence of 12 years for the attempted murder charge.

He increased it to 15 years because of the aggravating features.

He said he bore in mind that Kevin is two years older than his brother and played a larger role, was still relatively young, and had before then, an unblemished record.

From the notional sentence, the judge subtracted two years.

Kevin had spent one month and 15 days on remand, which must be deducted.

In the case of Javiss, although he is younger and played a lesser role, he had had a previous criminal conviction for an offence involving violence.

He began with a starting point of 12 years but because of his antecedents, the judge subtracted just one year from his sentence.

On the wounding with intent conviction, which carries a maximum sentence of life imprisonment, the judge made no detailed analysis of his sentence.

He said had wounding with intent been the only charge, he would have employed a starting point of 10 years and moved it up to 12 years and the sentences would have been shorter by two years in each case.

He, however, said that because he sees the lesser offence – wounding with intent — as necessarily included in the more serious one — attempted murder, he would impose no additional penalty.