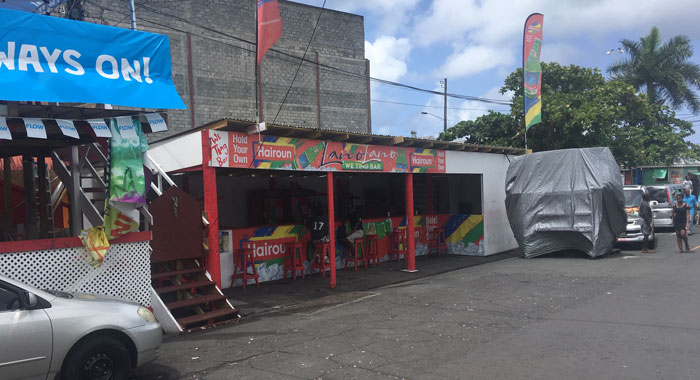 The carnival bar occupy the taxi stand at Heritage Square, one week after the festival ended. (iWN photo)

One week after Carnival ended, a taxi driver based at Heritage Square, Kingstown says a temporary bar there is affecting their business.

On Tuesday, a large bar and a trailer were still where the taxi stand is in the heart of the city.
This is not sitting well with Winston Lewis, who said he has nothing against Carnival and its planners, but that his business is being affected negatively.

“That is our time of the year and that is our fun,” he told iWitness of Vincy Mas.

“But Carnival done since [last week] Tuesday. Today is Tuesday. We have taxis; we doh ha’ nowhere to park, we have to dey spread out all about pon the road.

“We understand wha’ going on but at least the police could make preparation for us.”

Lewis said the police could reserve the area where the private vehicles are parked at the side of the road, until the bar is moved.

“We can’t tell them move it if they don’t want to move it,” he said of the bar.

“So we could only make our point, and we could only assume that they could make preparation for us and make us more confortable because it doesn’t look right.

“We have to pay duties on our vehicles, just like they want to sell out all the rest beers they have. We are not against that, but, please, we are asking could they do something for us, because it doesn’t look good for us at Heritage Square,” Lewis said, adding that he was asking on behalf of the other taxi drivers.

Meanwhile, the bar operator told iWitness News that the structure will be dismantled this weekend.

She said it should have been done last Sunday, but the contractor was ill.