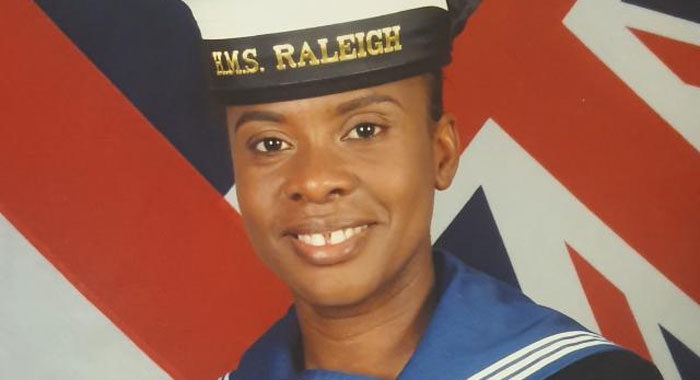 Vincentian Nicole Duncan is standing taller than her 5 feet 3 inches after being awarded the prestigious British navy Sapphire trophy.

The Vincentian, who hails from Coulls Hill, was presented with the trophy on May 31.

She was the only female among 58 males until the seventh the 10-week recruit training.

The award is bestowed upon new recruits, like Duncan, who exhibit determination, respect for others, courage, loyalty, integrity, discipline and overall improvement.

The sailor said the 20-kilometre walk and rope climb were some of the most challenging in her training but she was thrilled to learn aspects such as marching in formation, firing live rounds and navigation.

The 30-year-old expressed gratitude to the Royal Navy programme, her fellow recruits and tutors aboard HMS Raleigh but believed that it was her faith in God that has been propelling her.

The mother of two young boys, Gaizka and Vishwa also credits them, her family, fiancé Andrew as well as Beverly Delpleche for encouraging her.

The graduate of the Troumaca Ontario Secondary School and the St. Vincent School of Nursing admitted that it was never really her intention to join the military, as she was initially pursuing a career in nursing.

Duncan explained that she waited for years to get a placement from the Ministry of Health as a nurse but after receiving no response, she used her disappointment as a sign that she should enroll in the British military.

After the completion of her 10-week basic training, Duncan is now enrolled as a chef and is attending the UK military culinary school.

She said she decided to sign up as chef based on the high demand for persons in that unit and because she had always enjoyed cooking.

Duncan advises persons desiring to improve their lives to look into a career in the Royal Navy, as there are many opportunities to advance and build a career.