4 persons in hospital after accident at Argyle 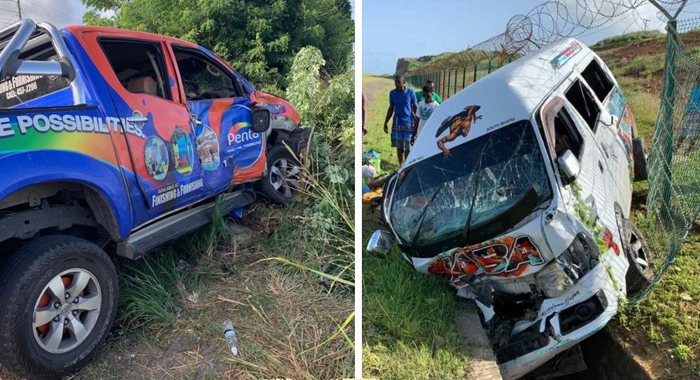 Four persons remain in hospital Sunday night after a collision involving two vehicles in Argyle on Saturday, which resulted in a minivan with 17 persons on board crashing into the perimeter fence at the airport.

In a statement on Sunday, Police said that a number of persons, including the drivers of both vehicles sustained injuries ranging from minor to serious.

Police say that at 3:40 p.m. on Saturday, motor omnibus HX819, a white Nissan Caravan, owned and driven by Ashaki Dellimore, of South Rivers, and motor vehicle T14, an orange and blue pick-up truck owned by Finishing and Furnishing and driven by Omri Mayers, of Brighton, collided on the Argyle Public Road in the vicinity of Still Waters Resort.

Both vehicles were badly damaged.

HX819 was travelling from Kingstown towards Biabou with 17 passengers while T14 was exiting the junction at Still Waters Resort heading towards Brighton.

As a consequence of the collision, HX819 veered off the road and ran into the perimeter fence of the Argyle International Airport (AIA) causing some of the passengers in HX819, including the driver, to suffer various injuries ranging from minor to serious.

The injured persons were taken to the Georgetown Hospital, Stubbs Polyclinic and the Milton Cato Memorial Hospital (MCMH) where they received medical attention.

Police say that persons with information that could assist in the investigation of this accident are asked to contact the Biabou Police Station or the Officer in-charge of the South Central Division at the telephone numbers 1784-458-0239 and 1784-458-4200 respectively.

All information given will be treated confidentially, police said.

“The Commissioner of Police wishes to reiterate to motorists and commuters to always observe the road traffic signs; drive carefully and with due care and attention to other road users on the public thoroughfares of St. Vincent and the Grenadines,” the police statement said.

3 replies on “4 persons in hospital after accident at Argyle”