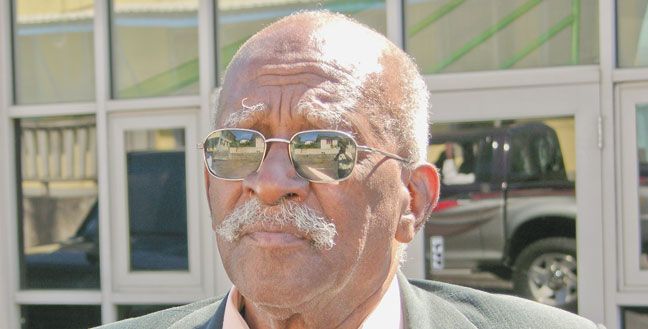 That was the loud response by 95-year-old lawyer Bayliss Frederick to his client, Aswith John, of Questelles, at the Kingstown Magistrate’s Court on July 15.

The lawyer had asked the court, mid-trial, to put the charge to his client again.

However, John maintained his not guilty plea on a charge that on July 9, 2018, at Questelles, he assaulted Osborne Alexander, occasioning actual bodily harm.

“Mr. John, are you guilty or not guilty?” Senior Magistrate Rickie Burnett asked John for a second time.

The court heard that the defendant and the complainant know each other well and Alexander was liming at a shop in the South Leeward village around 10:50 a.m. when he saw John in the road.

Alexander approached John, asking him about a report that he had disrespected Alexander’s 82-year-old mother.

John did not respond and Alexander walked away and was about to enter the shop when he felt a blow to the side of his face that caused him to fall to the ground.

As he turned around, he saw John standing over him with a crate.

John walked away, leaving Alexander with his injuries.

However, Frederick, who has been practising law since 1956, had a slightly different take on what had transpired between the men.

The defence counsel told the court the men both drink and are visitors to “every drinking establishment”.

Frederick said the men had “an ordinary quarrel that developed into a fight; not one attacking the other”.

The lawyer said that the medical report spoke of an abrasion.

Frederick said John is well known and works at his house and “everything else touching him is commendable and decent” except that when he is involved in an argument “he is not going to run away”.

Frederick asked the court to be as lenient as possible on his client.

In response, the senior magistrate said: “”Because he working at your house, he may be in a position to pay compensation.”

Burnett said that because the matter was part heard, he can say that the complainant is still upset and appears to have a particular view of the defendant.

“I don’t think they are buddies anymore,” Burnett said.

In response, Alexander told the court that most of what he had heard in the lawyer’s submission was untrue.

The magistrate, however, said the lawyer’s submission was for the court to consider.

He said the medical report spoke of a one-centimetre abrasion to the tip of Alexander’s nose and another that was three centimetres long.

The magistrate said that based on the doctor’s findings, the injuries were minor.

He placed the defendant on a bond for one year in the sum of EC$1,000.

If John breaks the bond and is unable to pay EC$1,000 forthwith, he will go to prison for three months.

One reply on “‘Say guilty!’ 95-year-old lawyer blurts out to client”