He will serve two years and seven months in prison, then a further six-year jail term will be suspended for two years. 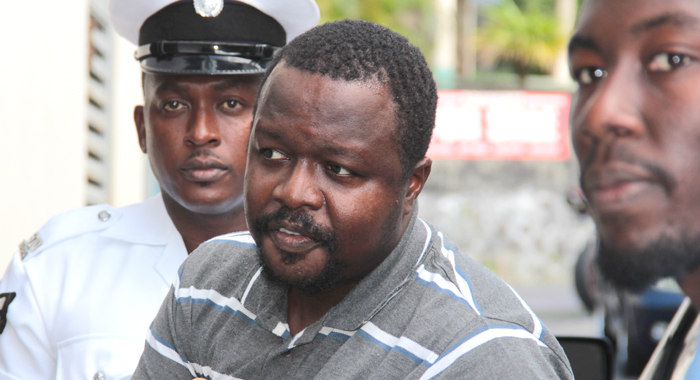 The former police officer who used a bandana and a wooden gun to rob the Canouan Branch of the Kingstown Co-operative Credit Union, did so after consuming “the devil’s soup”, his lawyer told the High Court on Friday.

For his crime, Kimolow Quashie, of Ottley Hall, will serve two years and seven months in prison, after which a further six-year jail term will be suspended for two years.

If he is convicted of another offence in those two years, he will return to prison to serve the six-year sentence.

Justice Brian Cottle handed down the sentence at the High Court on Friday.

Before his crime, Quashie had been fired from the constabulary, after 19 years of service.

Quashie further pleaded guilty to a charge that on the same day and place, he assaulted Shirlan Ashton of Rockies Village, Canouan causing actual bodily harm.

The facts of the case are that on the date in question, Quashie entered the Canouan Branch of the Kingstown Co-operative Credit Union armed with a knife and a wooden gun.

He threatened Ashton, the customer service representative, and was able to obtain EC$1,150.

He then demanded that the customer service representative take him to the front of the building.

A struggle ensued, during which the bandana that Quashie was using as a face mask fell away.

The “gun” also was dropped and the customer service representative recognised it as wooden.

Her screams attracted the attention of a nearby security guard and passers-by.

Quashie ran to some nearby bushes and police shot him in the leg while apprehending him.

In mitigation, Grant Connell told the court that his client had consumed alcohol on the day of his crime and had no intention of harming Ashton.

He said that after the robbery, Quashie ran to some nearby bushes and while there police officers came with guns and he attempted to run.

“He couldn’t run too far, too fast,” Connell told the court, adding that Quashie was shot twice and spent some days in the hospital.

“In the last three years,” Connell told the court, “Quashie has walked the straight and narrow and has not drunk any rum.

“He has sipped the devil’s soup and seen the effects,” the lawyer said.

“Some say it’s cheaper than woman; some say when it hit the liver, things happen; and some say ‘rum do dat’,” the lawyer said, recalling some of the punch lines of popular songs of this year’s carnival.

Connell said Quashie suffered injury from his act and asked the court to consider a suspended sentence, saying that his client has realised his mistake.

“We’re all mortals; the flesh is weak,” the lawyer said.