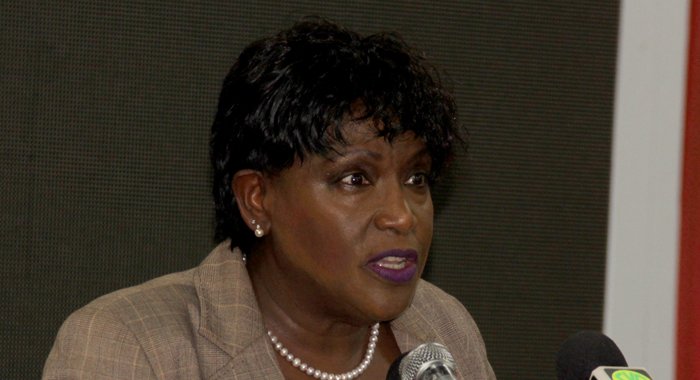 And opposition lawmaker has welcomed the launch of the National Prosecution Service but noted that it does not reduce the constitutional power of the Director of Public Prosecution (DPP).

Speaking on behalf of Opposition Leader Godwin Friday at last Wednesday’s launch, Senator Kay Bacchus-Baptiste, a lawyer, noted that section 63 of the Constitution of St. Vincent and the Grenadines gives  power over all prosecutions to the DPP

She noted that the DPP may delegate these powers to persons who must follow the DPP’s instructions and that these powers are to the exclusion of any other person or authority.

“And this includes the NPS,” Bacchus-Baptiste said, adding, “so, since the law has not been altered, the ultimate powers still rest with the DPP, not necessarily the NPS.”

She, however, said that the mission and vision statements of the NPS are “very laudable”, adding, “Now, maybe the time has come to vest this awesome power in a service like the NPS but, of course, as I said, this will call for an amendment to the Constitution.”

Bacchus-Baptiste gave an example, saying that in England, the 1985 Prosecution Offences Act, which created the Crown Prosecution Service, has the DPP as its head and the DPP is responsible for prosecution, but he owes his responsibility also to the attorney general, who, in turn is responsible to parliament.

“So I expect that the main responsibility of our NPS should be to provide legal advice to the police pertaining to criminal investigations and to conduct prosecutions.”

This will presume that the NPS should be made up of mainly lawyers and should also advise on charges, she said, adding that it is not advisable for police to investigate and lay charges and prosecute.

“So I commend the NPS for separating that function, for advising the police of what charges they should lay and for actually undertaking the prosecution.”

She said there was a great backlog of cases.

Now, there are about six lawyers who represent the DPP, the assizes sit continually, expect fort the court vacation but the backlog still remains.

“This is because of the amount of criminal matters we have coming to our courts. I would recommend that more matters be taken before the magistrate’s court to reduce the backlog and to reduce the burden that comes to the assizes.

“And with these trained lawyers now prosecuting, because before, prosecutors were only police in the magistrate’s court, a way to enhance the work of the NPS and to serve Vincentians might be to put more cases, according to the law, of course, into the magistrate’s court and reduce the backlog.

“Because up to now, I still have cases, some of them which are four and five years old, that cannot be heard yet in the criminal courts and this is because of the great backlog.”

Bacchus-Baptiste also argued that the NPS be more forthcoming with disclosure.

“Because, currently, we do get disclosure, but lawyers have to write and it takes time for the letter to get to the DPP and [for] the DPP to respond and this can contribute to time-wasting and delay. So, I recommend there be also an automatic disclosure before trials which would speed up matters.”