Jail for burglar who stole $50,000 in jewellery 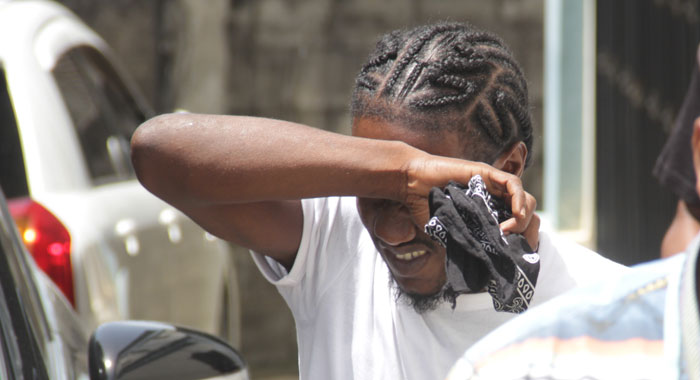 Burglary Jeffery Jordon hides his face as he is escorted to prison after his arraignment on July 23. (iWN photo)

The Kingstown man who stole EC$50,435 worth of jewellery from a store in the city has been jailed for four years.

At the Serious Offences Court in Kingstown, on Monday, chief magistrate Rechanne Browne handed down the sentence on 27-year-old Jeffery Jordon, who is originally from Mesopotamia.

The man was sentenced one week after pleading guilty to a charge that between June 22 and 24 he burglarised LMS, a jewellery store located in the PH Veira Building on Bedford Street and stole the jewellery.

In her submissions on sentencing, Crown Counsel Tammika Mc Kenzie noted that the charge carries a maximum of seven years in prison at the magistrate’s court level.

She noted the case of Desmond Baptiste, where, for a similar crime, the High Court sentenced him to eight of the maximum 14 years.

Mc Kenzie noted that Baptiste had also pleaded guilty and, at age 25, was younger than Jordon.

She noted that one-third discount given for a guilty plea and suggested that the court should begin with a notional sentence at the higher end of the seven years.

The chief magistrate said that the aggravating features of the case are that the jewellery stolen was of substantial value and the crime was a serious inconvenience to the business owner.

Browne said she viewed the offence very seriously, saying that it involved a great deal of planning, based on Jordon’s own admission.

The chief magistrate said that the crime was a group activity and that the victim was particularly targeted.

She said Jordon was motivated by financial gain and disposed of the jewellery wantonly, sought to blame others for the crime, and had used the dark of night as cover.

She said there were no mitigating features of the offence.

Regarding the aggravating feature of the offender, the chief magistrate noted that Jordon has over 20 previous convictions, all of a similar nature.

She said that while he was still relatively young, he seemed undeterred by the sentences imposed so far.

The chief magistrate began with a notional sentence of four and a half years in prison and added four months for each aggravating feature and subtracting the same period for each mitigating element.

On June 22, about 4 p.m., Morgan secured the store and left for the weekend.

When he returned about 8:30 a.m. on June 24, he found that the store had been burglarised and a quantity of stock was missing.

Police investigated and arrested Jordon in Kingstown about 6:30 p.m. on July 21.

Jordon volunteered a statement, admitting to the offence.

He said Williams is working with the police and called the police to arrest him on Sunday night.

Jordon also told the court that he gave someone in Mesopotamia a ring and a bangle.

Police recovered one gold-plated ring, which the court ordered be returned to the owner.