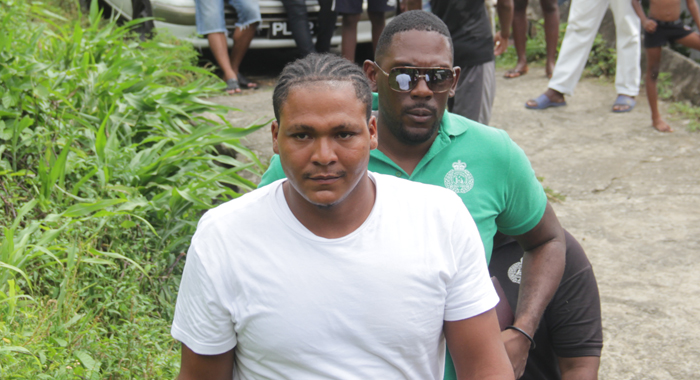 Jason Isaacs in police custody in Mahoe on Saturday. On Tuesday, he was brought to court, charged with murder. (iWN photo)

A Mahoe man has been charged with murder in connection with last Saturday’s stabbing death of another resident of the West Kingstown village.

On Tuesday, Jason Isaacs was brought before the Serious Offences Court, in Kingstown, charged with the murder of Michael Browne, 36.

Isaacs, who did not have a lawyer, was not required to plead to the indictable charge.

The prosecution is expected to call 15 witnesses during the preliminary inquiry, which Chief Magistrate Rechanne Browne set for Oct. 8, 2019.

Police said on Monday that Browne sustained stab wounds during and altercation with Isaacs and was pronounced dead at the scene.

Browne aka “Jumbie Stick” and “Jaro” was the brother-in-law of Gregory Decaul, a repeat burglar who was chopped to death in Kelbourne on July 22.

Browne died at the house in Mahoe where he and Decaul lived.

No charges have been brought in relation to Decaul’s death.

Browne’s death is recorded as the eighth homicide in St. Vincent and the Grenadines this year.