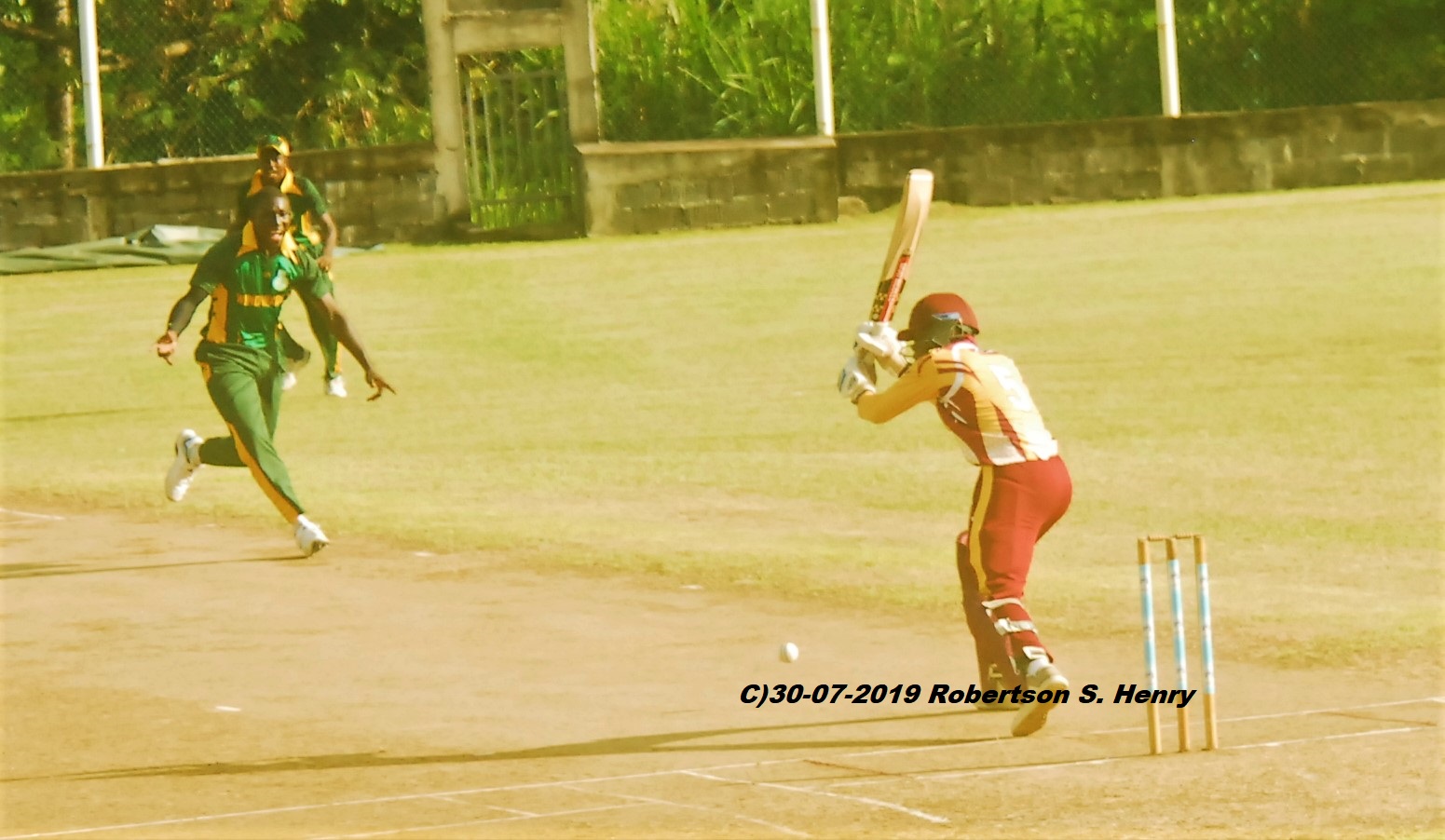 The Windward Islands, with strong performances from their batsmen and bowlers, backed up by sharp fielding, handed the Leeward Islands a 47-run defeat at the Cumberland Playing Field, in a rain-affected match which was reduced to 24 overs per side.

Windwards skipper Kimani Melius called right at the toss and decided to take first knock. He took the attack to the opposition for quick runs were needed.

Melius slammed 14-ball 17 before given out caught behind – 24 for 1.
Teddy Bishop hammered a top-score of 41 while Ackeem Auguste stroked 28.

And when the Leeward Islands had slowed the run-scoring, Seandell Regis tore into the attack towards the end, remaining 32 not out as the Windwards posted 146 for 8 in 24 overs.

For the Leewards Jaden Carmichael took 3 for 11, Zawandi White 2 for 31, and Akadianto Willett 2 for 34.

Following the opening 2 overs by Jamie Buddy and Lincoln Durand, the Windward Islands, shook off whatever nerves there might have been.

First their opening bowlers, then the back-up cast, applied a stranglehold on the game, that they never relinquished.

Their bowlers bowled with discipline and the energy displayed in the field kept the pressure on the batting side, which accounted for two run-outs.

Following the emphatic victory, Seandell Regis credited the fighting spirit of the team, and the hard work put in during practice sessions to the team’s management.

“I would like to thank the coach and manager on behalf of the team for all of the hard work we have been putting in, are surely paying off,” Regis stated.

“The washed-out game against Guyana did not take away our spirit, and we have come into this tournament not under-estimating any team. We are prepared to play hard cricket, and today was just an example of that.”

Speaking of his own contribution, Seandell Regis said: “Today we had a good game. I put my hand up today as a batsman for our team, and for the other batsmen who performed for the team today.

“In cricket these moments surely come and as a batsman, I was the last recognised batsman at the crease, As a Windward Islands players you got to know when to stand up to deal with situations. Today putting my hand up at the: right time was excellent for our team.”

The Windwards’ middle order batsman said “Adapting to the ground sometimes may be hard, and today I want to commend the guys.

“We did excellent work in the field, although the field was a bit wet. But the way the guys adapted to the conditions in the field is commendable.”
The Windward Islands next game is against Trinidad and Tobago at Park Hill today, Thursday at 9:30 a.m.