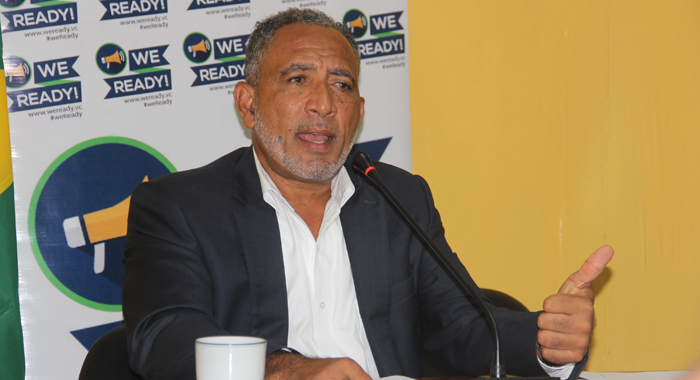 The Caribbean Development Bank (CDB) recognised and acted on the scam in the now-controversial award of the “Yarabaqua River Defence” project, although it did not use the word “fraud”.

So said Leader of the Opposition Godwin Friday at a press conference, in Kingstown, on Tuesday, in response to a July 22 statement by Edmond Jackson, chair of the Tenders Board.

In the statement, Jackson, who is also Director General, Finance and Planning, noted that the Barbados-based bank’s decision to declare misprocurement in the project did not contain any “allegation of corruption, fraud, impropriety or misbehaviour in public office by any official in the Government of St Vincent and the Grenadines or elsewhere”.

“Well, the CDB is a bank, not a police force or prosecutor,” Friday told the media. “So, naturally, the CDB would not make any allegation of fraud or corruption or anything of the sort.

“Think about it; how many banks here in SVG have had employees steal from them and they never charged the employee with fraud? Usually, they fire them and, in most cases, that’s the end of it.

“Well, it’s the same thing here. But the CDB saw the fraud, though, and they acted on it. They saw the fraud and they moved to end their involvement to recover their money from the fraud and normally that would have been the end of it for them,” the opposition leader said.

Friday said that because the Unity Labour Party government is misrepresenting the CDB’s position “to cover their corruption” the bank obviously felt obliged to release a statement in which it says “it is not the Bank’s practice to comment publicly on the specific details of individual procurement contract awards”.

Friday was referring to the statement released by the CDB last Thursday.

The bank said the statement was not a comment on any project, in particular, but outlined that recipients of financing are responsible for managing CDB-financed projects, including the award and administration of contracts under the projects, in accordance with the bank’s procurement policies and procedures.

These are underpinned by principles of economy, efficiency, fairness and transparency,” the bank said, adding, “Where a contract is not procured in accordance with its policies and procedures, CDB will declare misprocurement and will cancel the financing for the contract even if a no-objection had already been issued by the Bank.”

Friday said that Gonsalves and his “acolytes” in using the fact that the CDB “did not call it fraud as a justification to say that it was not fraud, is simply being disingenuous.

“There was fraud and corruption, and that is clear for all to see,” the opposition leader said.

“What we see now is a continuing lack of accountability, which has led to more corruption. We have warned the nation about this many times before and will continue to point it out when we see it. We have done that here,” he said.

After conducting its own review, the CBD declared misprocurement and ordered Kingstown to repay all monies disbursed under the EC$1,421,567 contract.

The review began when Bally and Bally Investments Inc., one of six unsuccessful tenderers, complained that Reliable Construction Services Ltd., the firm to which the contract was awarded, did not have the requisite experience in gabion basket and river defence construction.

Meanwhile, Friday also responded to comments by Gonsalves that the CDB had issued a letter of no objection prior to the contract being awarded to Reliable Construction.

“The clear implication is that if it is a fraudulent contract, then the CDB is somehow liable for approving such a contract,” Friday said, adding, “As usual, Gonsalves is misleading Vincentians.”

The opposition leader said that the fact of the matter is that as a funding agency, the CDB provides funding “on the basis that their rules will be followed and that the various parties involved will act ethically, honestly and in good faith”.

He said the government receives the funding on this basis and the ministry is responsible for executing the funded project.

“It is the government’s responsibility to evaluate the tenders and to explain the basis of the evaluation to the bank, in a written tender report,” the opposition leader said.

He said that while the executing ministry may hire a consultant to perform this evaluation, “it is the responsibility of the government’s machinery to ensure that the evaluation is carried out fairly, competently and based on the rules identified by the CDB.

“The CDB does not examine or evaluate the tenders.  This is the job of the executing agency – i.e.: the government!” Friday said.

“If someone in government and/or some other party is intent on perpetrating a fraud  — say, for example by falsely claiming a contractor has some particular expertise or experience that is required –, and if the tender evaluation report does not expose the deficiency, there is no way the CDB can find this out on their own.”

He said this is where Bally and Bally came in, adding that the CDB allows for protests to be made for this very reason – as a second line of defence against fraud and corruption and its website refers to and encourages whistle-blowers as a means of protecting its process.

“So, we see that the CDB’s “no-objection” is not an approval of a fraudulent contract, as Gonsalves and ULP spokespeople are trying to suggest.  The CDB does not expect fraud to come from the chambers of its borrowing member countries, so it takes the submitted tender evaluation report at face value. Of course, it anticipates that fraudulent practices can occur, and it places specific provisions in its procurement process to allow avenues for the discovery of and consequences for fraud,” Friday said, adding that every contract that the CDB finances has a clause dealing with corruption and “fraudulent misrepresentation”.

“The “no-objection” granted by the CDB therefore assumes that the government and its agents are acting ethically and have done their job properly. It did not amount to an approval of a fraudulent contract in the present case,” Friday said.

“But, as we now know, this is where the CDB has run into a problem.  In their dealings with the Ralph Gonsalves administration, they are dealing with an unethical, corrupt administration.  And don’t be fooled, they know it.  And that is why they are now standing up for ethics and saying no to fraud and corruption,” the opposition leader stated.