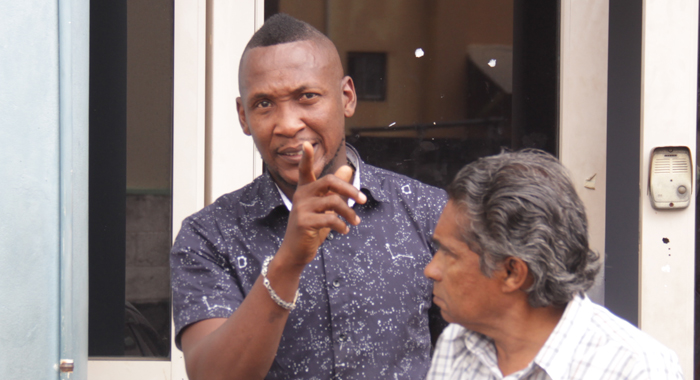 Paul Stephens, left, the complainant in the matter became aggressive as soon as he exited the court building. He is filed her gesturing at Kenton X. Chance of iWitness News. Journalist Hadyn Huggins is in the forefront. (iWN photo)

Paul Stephens, the man who was beaten during a mob attack at a funeral last year, got aggressive towards journalists outside the Kingstown Magistrate’s Court on Tuesday as the trial of the men accused of wounding him continued.

Stephen got aggressive towards Kenton X. Chance of iWitness News and moved towards him threateningly after Chance took his photograph when he exited the court building in Lower Kingstown Park.

As Chance began taking the photograph, Stephens commented that he had already told the journalist that he does not want his photo taken.

Chance pointed out to Stephens, that he was in his right to take a photograph of him, or anyone else outside the court or in any public place.

Stephen and another man, moved threateningly towards the journalist, expressing his willingness to revert to blows.

Chance, in response, told Stephens that he was willing to defend himself, if attacked.

Katherine Renton, of Searchlight newspaper, who was also outside the court building, began to photograph the confrontation when the other man moved towards her threateningly, telling her if she did not hear that Stephens did not want to be photographed.

St. Clair Charles, a freelance journalist, shouted at the man, telling him that people have a right to photograph other persons in public.

Lawyer Linton Lewis, a defence counsel in the case, also rebuked Stephens and the other men.

The incident occurred as the journalists and Lewis were chatting outside the court and discussing various elements of the trial.

They claimed that journalists must first ask for permission before photographing persons outside the court.

In St. Vincent and the Grenadines, there is no law preventing any person from taking a photograph of any other person or thing in a public place.

However, the manner in which that photograph is used may open up a person to legal challenges.

The principle is akin to freedom of expression: there is no rule preventing someone from speaking in public but there are rules governing what a person can say in public.

The incident occurred on a day that Lewis subjected Franklyn to a long cross examination in the case in which five men are charged with assaulting Stephens, a 42-year-old businessman of Keartons, Barrouallie, originally from Chateaubelair.

A video circulated via social media showed Stephens being beaten viciously at the Chauncey Cemetery.

However, the video has not been tendered into evidence.

The men allegedly committed the offence at the funeral of Je-Tonnia Thomas, 32, at the Chauncey Cemetery, on May 27, 2018.

Thomas, Stephens’ fiancée and mother of his child, was found dead on May 10, 2018, at their Keartons home.

At the time of the woman’s death, Stephen had said that she was his wife, but it later emerged that they were never legally married.

Police later said that the dead woman was not Thomas and an autopsy revealed that Thomas died of heart failure, resulting from an undiagnosed heart condition that made the organ larger than normal.

Stephens was savagely beaten during a mob attack at the Chauncey Cemetery on the day that Thomas was buried.

During Tuesday’s hearing in the case, Franklyn told the court that she was standing at the roadside near the cemetery when she heard Daniel, who she identified in the dock by his bleached beard, make a sound like a dog barking.

Defence counsel Ronald Marks objected to her identifying the man in this way, saying — for yet another time during the trial — that the prosecution witnesses were engaged in in-court (or dock) identification.

Franklyn said that after making the sound, Daniel ran into the cemetery and started attacking her uncle.

She said that the five defendants began attacking Stephens, adding that one of them had a piece of board, another threw a concrete block at Stephens, another had a cutlass, and one had a stone.

Franklyn, however, did not say which of the men had each of the items.

She said that the attack occurred as the coffin was being lowered into the grave.

Franklyn said that when the attack began, she was at the roadside and she began to make her way back into the cemetery but was unable to do so because persons were fleeing in her direction.

During his cross examination of Franklyn, Lewis tested many of the things she claimed to have witnessed about the incident.

She admitted that she had seen a video of the incident before she gave the police a statement, but denied basing her statement on the video, rather than on what she actually witnessed.

During her cross examination by defence counsel Ronald Marks, Franklyn went on to tell the court that she was the first of Stephens’ relatives to leave the area to go toward the police station when the fracas broke out.

‘A lot of things happening in a small moment’

On July 12, the court heard the testimony of Pastor Sheldon Nichols, of the Seventh-day Adventist Church, who officiated at the funeral.

He told the court that he remembers the incident “vividly because I had just given or was in the midst of giving the benediction” when it occurred.

He said mourners where just about to sing “the crowning song” (the song sung as flowers are placed on the grave) when Stephens was attacked.

The cleric, who told the court the he did not know the name Paul Stephens, as his church was merely asked to conduct the funeral, said the attackers came from behind him and he was facing the target of the attack.

“A lot of things happening in a small moment,” Nichols told the court.

Also testifying on July 12 was Police Constable 502 Millington, whose house is located along the roadside opposite the cemetery.

Millington said she knows all of the accused men very well, having lived in Chauncey for five years.

She said she was in her patio when she saw Daniel place his hand over his mouth and made a howling sound.

She said that when Daniel made the sound, Junior Charles ran into the cemetery, and two young men whom she does not know, were trying to hold back Charles.

Charles, however, got away from the men, went into the crowd and threw a punch at Stephens, the police officer told the court.

She said that Daniel ran into the cemetery and the crowd of mourners who were at her gate ran into her porch and began shouting “advantage”.

Millington said she went out and looked into the cemetery to see what was taking place.

She said a few more men entered the cemetery from various angles and started to throw punches and articles at Stephens.

She told the court that she saw Casim Alexander, who she knows as “Cas”, take up a piece of wood and strike Stephens with it.

Alexander then took up a concrete brick, raised it and released it at Stephens, the police officer said.

She said she then went into her house for her mobile phone and called the police control and informed them of what was happening.

Millington said that when she returned to the patio, she saw a crowd surrounding Stephens and taking him out of the cemetery.

The trial continues on Friday, Aug. 9.

Junior Charles, Thomas, and Daniel are charged, separately, with possession of an offensive weapon, to wit a stone.