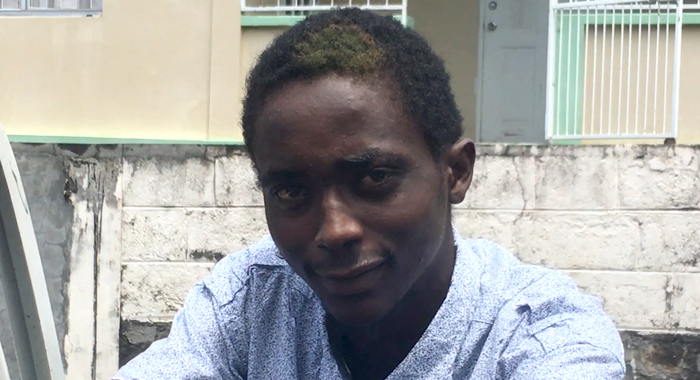 Zian Ashton sits in a police pick up for transportation to prison on Monday. (iWN photo)

Luckily, police from the Calliaqua Police Station met him in Arnos Vale and arrested him.

Now, Zian Ashton must plan for his next two birthdays within the walls of Her Majesty’s Prisons.

On Monday, Senior Magistrate Rickie Burnett sentenced Ashton to nine months in prison for possession of three rounds of .22 ammunition without a licence, three years for possession of an unlicensed .22 revolver, and one year for being equipped to commit an offence, to wit, theft.

Ashton had pleaded guilty to the charges on his birthday, last week Friday, Aug. 8, when he was arraigned at Kingstown Magistrate’s Court.

On Monday, Ashton maintained his guilty plea when he reappeared before the senior magistrate.

The facts in the case are that officers from the Calliaqua Police Station, led by Corporal Steven Derby, were on patrol in the Arnos Vale Area around 1:45 a.m. last Friday.

They met Ashton wearing a black tam that was almost covering his face. He was also wearing a grey vest, blue short pants, and black and white slippers, with a back pack on his back.

He was walking with another male.

Ashton consented to a search and the police found his backpack to contain a mask resembling a clown, a black t-shirt, and a black handle screwdriver.

The police also conducted a search of Ashton’s person and a revolver fell from his waist.

Police found the weapon to be loaded with three rounds of ammunition.

Ashton was cautioned and said nothing. He was taken to the Calliaqua Police Station, where he was interviewed in the presence of a justice of the peace.

A police firearm expert found that the firearm was functional and the ammunition live.

In his caution statement, Ashton said that he had found the gun under a mango tree in Arnos Vale.

He said that Thursday night, he decided to take a walk with it and he saw one of his “soldier” walking and they began walking together when the police came upon them.

Ashton said he had never used the gun or fired it off.

In mitigation, the defendant told the court that he had the gun in his waist and his vest was covering it.

He said that when the police pulled out his vest, the weapon fell.

Ashton said he always carries the screwdriver and t-shirt in his bag.

The man told the court that he was unemployed “right now” but he is a mason.

He went to the Georgetown Secondary School but dropped out in 2014 at form 3 because he was living on his own and took care of himself by working on weekends.

He said he was staying with a cousin in Arnos Vale recently and was going to one Mikey’s to start drinking something in celebration of his birthday.

The magistrate observed that 1.45 a.m. was a strange time to begin celebrating one’s birthday.

“I did feel trigger happy in the night,” the defendant told the court, adding that he had worn the mask to carnival.

“But we are now in August. Why you choose to wear that that time of the month?” he asked.

In response to a question from the senior magistrate, Ashton said he does not read newspapers but he listens to the news on radio and is not aware of the attitude of the court to firearm offences.

As he sometimes does, the magistrate engaged defence counsel at the bar table, although they were not involved in the matter.

Counsel Michael Wyllie said what he would like to know is whether there have been firearm offences in the Arnos Vale Area recently.

Meanwhile, counsel Linton Lewis said his mind had gone into the realm of philosophy.

The lawyer said he found it difficult to understand why someone was going with a mask, black sweater, and firearm to celebrate their birthday.

Ashton said that the long sleeved t-shirt was to put on when he got cold.

Lewis added that Ashton had had a Freudian slip when he said that he was trigger happy.

The lawyer further said he wondered if the defendant was speaking the truth when he said he was placed in unfortunate situation of having to take care of himself.

Lewis, however, said that this does not justify getting involved in a life of crime.

“If he was trigger happy, all someone had to do was to pass by,” the lawyer said, adding that being in that mind-set, if Ashton had drunk alcohol, he could have been easily provoked to use the weapon.

The lawyer seemed to anticipate a prison sentence for the defendant, telling a court that he does not know what happens in prisons, but he thinks that Ashton should receive counselling.

He said he was at a court recently when an experienced defence counsel pointed to four young men and said they are the most dangerous people in St. Vincent and the Grenadines.

In his submission to the court, Senior Prosecutor Adolphus Delplesche said he was on the same wavelength as Lewis.

He also could not understand why Ashton had those items on his way to celebrate his birthday.

The prosecutor said that when he turned 19, he celebrated his birthday at police training school and could only have had Ju-c (a soda).

Delplesche said that police in Calliaqua have reported an upsurge in robberies in the Calliaqua–Arnos Vale area, hence their patrols.

He said that the items that Ashton had in his possession are serious aggravating factors, adding that the mitigating factors were his age and the fact that he had no previous convictions.

The prosecutor recommended a sentence of two and a half to three and a half years in prison for the firearm.

10 replies on “‘Trigger happy’ man sets off with gun, mask to ‘celebrate’ birthday”