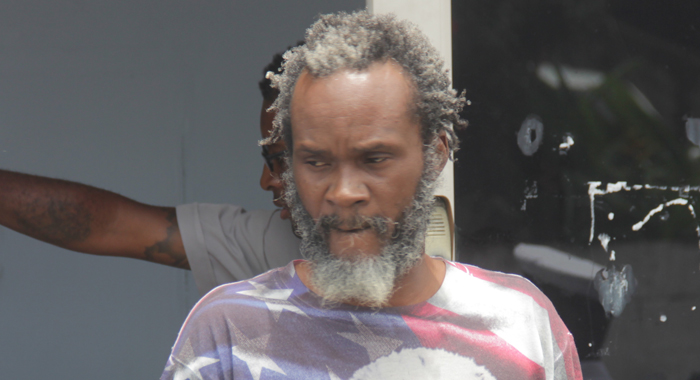 The report concerns Franklin Davis, who was charged with wounding in 2016. He is seen here leaving the Kingstown Magistrate’s Court on Tuesday. (iWN photo)

Senior magistrate Rickie Burnett has ordered that a report on a man sent for psychiatric evaluation almost two years ago be presented to the court by Monday or that the Registrar of the Mental Health Centre appear before him to explain the delay.

The report concerns Franklin Davis, who has been warded at the psychiatric hospital since 2017 on a court order that he be evaluated.

When the matter was called on Tuesday, the second time in less than a week, Burnett was told that the person responsible for the report was out of state.

Prosecutor Police Constable Corlene Samuel further told the court that the registrar, Dr. Karen Providence had said that she was awaiting another court order to prepare the report.

Burnett said he could not understand why the registrar was asking for another court order before the report was prepared.

Burnett, who was appointed senior magistrate in January 2018, noted that Dr. Bell had prepared a report on Davis on Nov. 22, 2017.

In that report, the psychiatrist said that Davis was a threat to others and was in need of long-term medical treatment.

“Let her know that if the report is not ready on Monday, she has to come to court and explain,” Burnett said of Providence, who Burnett also summoned to the court in June 2018 to explain the delay in some reports.

He said that some institutions in St. Vincent and the Grenadines are being run as if they are still in the “dark ages”.

Burnett, however, said that humanity is living in an enlightened world and people must behave as if that is the case.

“He has been a patient for two years. Somebody ought to know what should be in this report. It is not as if he was sent there yesterday,” he said.

Davis’ matter only came to the court’s attention because the magistrate had ordered that all persons with part-heard matters be brought before the court for case management the previous Friday.

Davis’ case has been in the court system since 2016, he having been accused of wounding someone on Feb. 15 of that year.