Referendum vote ‘was a rejection of emancipation’ — Campbell 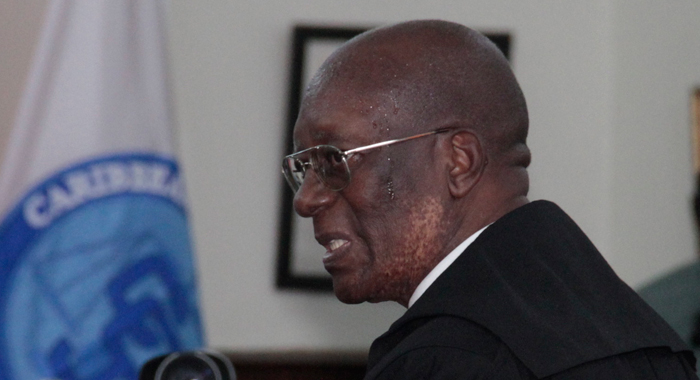 The constitutional expert who said last year that he felt “personally wronged” when Vincentians rejected proposed changes to the nation’s Constitution a decade ago says that in that vote, electors also “practically abolished emancipation”.

Queen’s Counsel Parnell Campbell made the comments on Monday in his weekly television programme, “The Law and You” on SVGTV, while commenting on objections to the government’s decision to install a new governor general on Aug. 1, Emancipation Day.

Critics of the decision have noted that the day commemorates the emancipation of enslaved people of African descent and have pointed to the irony of the Queen’s representative being installed on that day.

The installation event included the playing of the British national anthem, “God Save The Queen.”

On Nov. 25, 2009, Vincentian electors overwhelmingly rejected proposed changes to the constitutionthat the British left when St. Vincent and the Grenadines gained independence on Oct. 27, 1979.

Campbell was chair of the Constitution Reform Commission which conducted a years-long review of the constitution, which included consultations with Vincentians at home and abroad.

However, with elections looming, the exercise descended into  partisan politics with the government refusing to budge on key proposals that citizens felt strongly about.

The parliamentary opposition withdrew its support for the exercise and campaigned against it.

The government went ahead with the referendum one year before a general election would be called, in which it saw its hold on the parliament reduced by one-third.

The referendum needing 66.6% of the votes to carry but attained only 55.29% of the ballots in a vote that political observers said was a verdict on the Ralph Gonsalves government rather than on the proposed changes to the nation’s supreme law.

“The majority of the electorate of this country, on the 25th of November 2009 practically abolished emancipation when they rejected the attempt, among other things, to remove the monarchy from the headship of the state of St. Vincent and the Grenadines and voted in no uncertain terms to keep her majesty The Queen,” Campbell, a former attorney general said.

“The choice was given, a new constitution was proposed, albeit repeating many of the clauses of the old constitution but bringing in a number of new institutions, particularly attempting to move us away from the queen to a republican form of government where we would have been headed, as head of state, by a  home-grown president. The people said we want to keep the queen and to me, that was a rejection of emancipation. The people refused to be liberated from colonialism,” Campbell said.

“And when they voted to keep the existing constitution instead of the new one we were proposing, then, to me, the people signalled by their majority that they like it so, in the words of King Nelson.”

He said the present constitution makes it clear where the nation stands in regard to the monarch.

Campbell said he was surprised that “distinguished persons could write in the newspaper doubting that Queen Elizabeth the Second is Queen of St. Vincent and the Grenadines”.

Campbell further quoted section 23, which says, “There shall be a Parliament of Saint Vincent which shall consist of Her Majesty and a House of Assembly.”

He noted that each session of parliament begins with the sergeant-at-arms bringing in the mace, signifying the presence of the Queen in the chamber

He further cited section 50, which says, “The executive authority of Saint Vincent is vested in Her Majesty.”

He pointed out that the proposed constitution would have replaced the queen as the nation’s head of state.

Campbell reiterated that when given a chance to remove the monarch, Vincentians refused.

“We said we like it so. We want to keep Queen Elizabeth II. So what are we fretting that her representative was sworn in on Emancipation Day. What is so sacred about emancipation day after we reject the concept of getting rid of colonialism in November 2009?”

“And it wasn’t a close decision,” Campbell said, adding that he had the figures with him.

“And those of us who fought for the new constitution had to accept that that was the will of the majority. The people want to keep Queen Elizabeth; the people didn’t want to leave colonialism alone. So what are people telling me now? What is the fretting about emancipation?

“…We have a queen. We voted to keep the queen. So it doesn’t matter what day the Queen’s representative is sworn in. what is important is that Her Majesty Queen Elizabeth the Second is our Queen because that is what the people said they wanted,” he said.

In July 2018, during a ceremonial sitting of the Caribbean Court of Justice (CCJ) in St. Vincent and the Grenadines, Campbell spoke about the personal impact of the referendum vote.

“I felt it deeply. I felt personally wronged because I had been the chairman of the Constitutional Reform Commission,” he said.

“I have been a member of the New Democratic Party; I served as Attorney General and Minister of Justice for eight and a half years. And because of the role that the party played in the rejection of the referendum proposals, I became estranged from my party. Over the years, like a good Christian, I came to forgive them, he said to laughter, adding, Forgive them, Lord, for they know not what they do.”

A “yes” vote would have also replaced the London-based Privy Council with CCJ as SVG’s highest court.

13 replies on “Referendum vote ‘was a rejection of emancipation’ — Campbell”