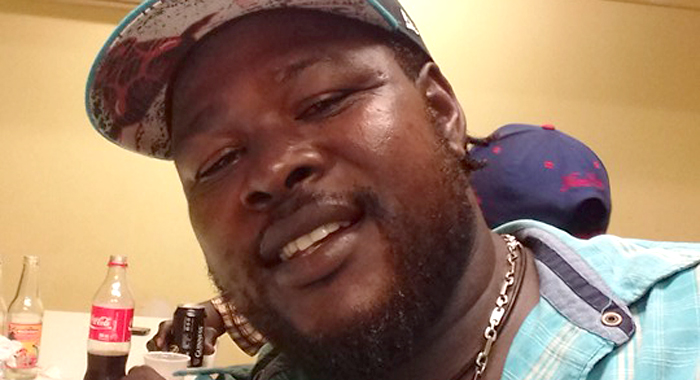 Sylvan Nanton was shot and killed in Diamond on Friday. (Photo: Facebook)

The older brother of the man who was shot and killed in Diamond Friday morning says he believes the killing was linked to a young female with whom the deceased man had a relationship.

“There is a high probability,” Kenroy Nanton told iWitness News on Saturday of the death of Sylvan “Syl” Nanton.

Sylvan, a 41-year-old mason and carpenter, was one of two men shot and killed in separate incidents in less than 24 hours in St. Vincent and the Grenadines.

The other was Nyanga “Nansy” Sam, a Paul’s Avenue resident, who was killed in the Kingstown community Friday night.

Reports are that Sam was hanging out with friends when a car, with no registration plate, pulled up and an assailant who was wearing a hood shot him twice in the face.

Sam died on the spot, bringing the homicide count so far this year to 13, 10 of which have been classified as murders.

Kenroy told iWitness News that his brother was killed in his (Kenroy’s) vehicle, which they shared and both used.

Kenroy said he had no idea when his brother might have left home as he, too, has a key to the vehicle and uses it at will.

He told iWitness News that Sylvan was killed in an area where the woman he was dating is said to be living.

The woman lived briefly with Sylvan on the ground floor of the two-storey home, where Kenroy lives on the upper floor with his mother.

On Aug. 8, just one week before Sylvan was killed, a woman came to the house saying she had come for her daughter.

“I am being told that he was warned that that young lady is trouble and he did not take heed,” Kenroy told iWitness News.

“He had the lady down in the house there and the mother come and say she wants her daughter. I don’t know the age but she said she is 18 and the mother said she was lying; she’s not 18. So when I saw parents come for her, I realised it’s someone who’s still under parents’ care, who cannot decide on their own,” said Kenroy, a sailor and former police officer.

“So last week Thursday to next Friday morning, he’s dead,” he said of the timeline of the event, adding that there is a “high probability” that there is a link between the two events.

Kenroy said he was in his bedroom at 6:16 a.m. Friday when he heard someone calling his mother.

He said he asked the person, a villager, how he could help and they responded, “Tell Mena they shoot Syl over ah Diamond and he dead.”

Kenroy said that when he got the news of his brother’s death, he asked a neighbour to accompany him to the scene but by the time he got there, the police had already cordoned off the area.

The man said they have been living in the area for 21 years and his brother, a mason and carpenter, “is well known for his lifestyle.

“He goes around, he helps, he builds; everybody in the area knows him.”

iWitness News had heard rumours of a possible link between Sylvan’s death and a woman with whom he was involved.

Kenroy said he was aware of his brother’s involvement with the woman because she was living at their house.

“When I saw the scene on Facebook where the vehicle ended up after he succumbed to his injuries, it is not too far from where that young lady lives.”

He said that according to the investigating officer, Sylvan was killed inside the vehicle.

Kenroy said that as a brother, Sylvan had his “very good side — very, very good side and there is a small percentage of a chance that when he drinks he can be miserable.

“But sober, very kind, friendly-spirited; sometimes he just gets up and go and make a trouble, you don’t know where that comes from.”

He said his brother has been arrested for domestic argument, threats, offensive weapons, but has never been convicted.

“Up until two years or a year and a half ago, his life was just taking a downward spiral with a series of events that are not consistent with the way we live and the way we were brought up,” the older brother said.

Nanton said he was talking about his brother being involved in domestic violence and being in and out of a relationship.

Nanton said he does not want to use the word “shocked” about the way his brother was killed “because he is not as innocent as I would want to say and I am honest as possible.