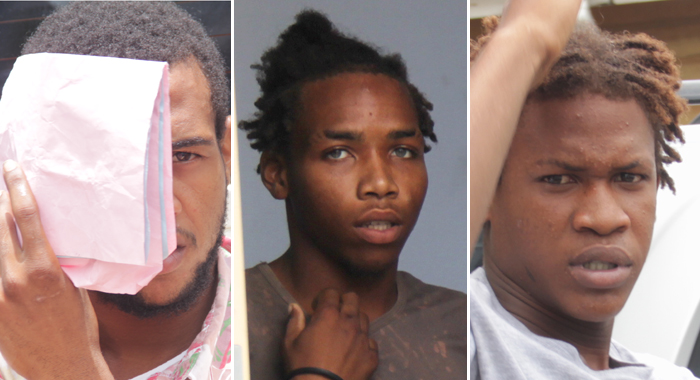 Senior Prosecutor Adolphus Delplesche, on Monday, made a forceful submission to the Kingstown Magistrate Court asking that bail be denied to three teenagers accused of armed robbery in the Calliaqua Police District.

The district includes Diamond, Arnos Vale, Brighton, and Villa and Delplesche said police have seen what they describe as “a very serious and scary upsurge” in robberies there.

He was at the time making a submission after the arraignment of Shamol Williams, 16, and Jovanny Stephens, 17, of Diamond.

The duo was charged that on July 26, at Diamond, being armed with a gun, they robbed Jeff Morgan, of Diamond, of a white HP laptop, value EC$3,000, a Samsung Galaxy Plus Cellular phone, value EC$1,000 and EC$500 in cash, Morgan’s property and at the time of so doing and in order to do so, put Morgan in fear of being then and there subjected to force.

They were further charged that on July 26, at Diamond, they entered Morgan’s home as trespassers and had with them a weapon of offence, to wit a gun.

The charges were laid indictably and the men were not required to plead.

Delplesche told the court that as it relates to the robberies and aggravated burglary, the prosecution was objecting to bail.

He said detectives say that the accused men are of interest in other investigations.

Delplesche said there are exhibits that investigators were trying to recover, including the firearm allegedly used in the commission of the offences.

He said investigators have informed the prosecution that they have an indication of where they can find the items but are saying that if the men are granted bail at this juncture, the possibility is very real of them hindering the investigation.

“They are asking for an opportunity to dig a little deeper and to try to recover these items, which include the firearm,” Delplesche said.

Delplesche said he has informed investigators that the court cannot detain the men ad infinitum and that the investigation must proceed apace so that the matter can be ventilated.

“But, for the moment, your honour, we are asking for a little more time,” he said and asked that the matters be adjourned and transferred to the Serious Offences Court for hearing on Sept. 3.

In response, counsel Samantha Robertson, who represented Stephens said that given the information that the prosecutor had related to the court, she would not put up a resistance if the men were remanded for several days.

Also on Monday, Stephens was charged that between Aug. 8 and 9, 2019, at Prospect, he entered the apartment of Lydia Tiawo of Prospect as a trespasser and stole one black HP bag, value US$17, containing one silver HP laptop, value, US$480 and EC$1,380 in cash.

Further, Michael Richards, 21, of Calliaqua, and Stephens were charged that on Aug. 15, at Prospect, with intent to commit the offence of burglary on the apartment of Lydia Tiawo, of Prospect, they did an act which is more than merely preparatory to the commission of the offence.

They both pleaded not guilty.  Prosecutor Corlene Samuel did not object to bail but asked for sufficient surety.

The men were granted EC$2,000 bail and one surety; the matter was adjourned and transferred to the Calliaqua Magistrate’s Court for the following day, Aug. 20.

Richards was further charged that on Aug. 2, 2017, at Diamond, he assaulted Brenton Pope, 38, of Lauders, causing actual bodily harm.

He was also charged that on Aug. 2, at Diamond, being armed with a gun, he robbed Pope of one red headphone value EC$20 and EC$20 in cash, and at the time of so doing and in order to so do put Pope in fear of being there and then subjected to force.

Richards was not required to plead to the indictable charge.

Delplesche told the court that in relation to Richards, the prosecution was asking for a remand as the investigators try to make some headway into their investigation into the upsurge.

He said that the reasons are the same as it relates to the accused in the other robbery cases.

He said that investigators are trying to recover the firearm that was allegedly used.

Also on Tuesday, Camilius Forbes, of Georgetown, was charged that on July 22, at San Souci, being armed with a bottle, he robbed Kelly Ryan, of Chester Cottage, of one cloth wallet, value US$10, containing US$40 and EC$765 in cash, one brown leather belt, value US$20, one black Motorola cellular phone, value US$320 and EC$145 in cash, Ryan’s property and at the time of so doing and in order to do so put Ryan in fear of being then and then subjected to force, to wit “by striking him with a bottle”.

He was not required to plead to this indictable charge.

Forbes was further charged that on July 22, at San Souci, he did unlawfully and maliciously wound Ryan of Georgetown.

Samuel did not object to bail but asked for a reporting condition, no contact with the virtual complainant and that the matter be transferred to the Serious Offences Court.

Forbes was granted EC$7,000 bail with one surety and was ordered to report to the Georgetown Police Station.

All the indictable charges were adjourned and transferred to the Serious Offences Court for the next hearing on Sept. 3.