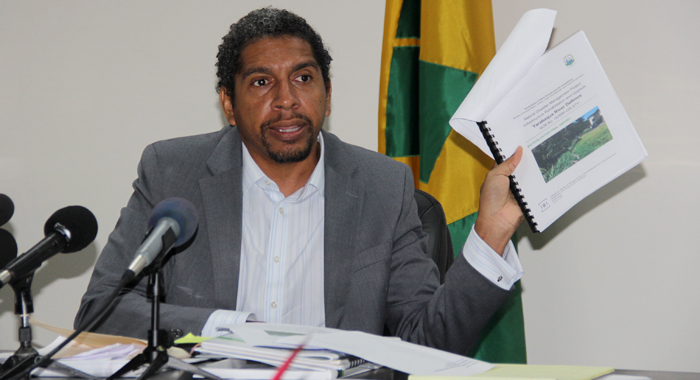 Minister of Finance Camillo Gonsalves holds up the bid evaluation report at a press conference in Kingstown on Tuesday. (iWN photo)

The government of St. Vincent and the Grenadines has declared “blameless” itself and Reliable Construction Services Ltd., the winning tenderer for the Yarabaqua River Defence project, for which the Caribbean Development Bank (CDB) has declared misprocurement.

“Of the players involved in this saga — the Government of St. Vincent and the Grenadines, the winning bidder, Reliable, the complaining bidder, Bally and Bally, the consultants IBI, and the Caribbean Development Bank — the two blameless, absolutely blameless parties in this are the winning bidder, Reliable, because they put everything upfront, they didn’t tell any lies to anybody, and the government of St. Vincent and the Grenadines, because they followed every single process to the letter in going through the process,” Minister of Finance, Camillo Gonsalves told a press conference in Kingstown on Tuesday.

“And that is why, ultimately, even though the CDB says they don’t like to comment on individual contract awards, they had to come back and say no fraud and no corruption on the part of the government of St. Vincent and the Grenadines,” Gonsalves said.

He said those were his only comments as he was confining himself to “statements of fact” on the issue at the joint press conference with Prime Minister Ralph Gonsalves.

The finance minister’s comment came on the heels of a recent meeting in Kingstown with President of the Barbados-based CDB, W. Warren Smith and Doug Fraser, head of procurement at the CDB, along with then acting Prime Minister, Montgomery Daniel, Minister of Works, Sen. Julian Francis, and various public servants, including head of SVG’s Tenders Board, Edmond Jackson.

In outlining what he said were the facts of the development, the finance minister began with the “Loan Agreement Natural disaster management rehabilitation and reconstruction December 2013 trough event” between the CBD and SVG, signed in November 2014.

The loan agreement covers a number of projects relating to climate resilience and also covers the Yarabaqua project, and in it, the CDB lists the conditions precedent to the first disbursement, which include a “condition precedent to disbursement with respect to immediate mitigation works”.

The CDB mandated the government to furnish evidence acceptable to the bank that an engineering consultant responsible for design, review, and construction supervision be engaged.

The government hired an entity called IBI group, a Canadian firm, one of the largest engineering and architectural consultants in the world, with over 2,400 employees and in one of the top 10 globally, in terms of size, Gonsalves said.

IBI evaluated the bids for the Yarabaqua project and prepared for the Ministry of Transport and works a document over 100 pages long, called “The Yarabaqua River Defence … Bid Evaluation and Final Report”, dated Aug. 10, 2018.

The report recommended Reliable Construction Service Ltd. from among the seven tenderers.

“The chief engineer says yes; send it forward to the CDB for their ‘no objection’.  The CDB did not object. They wrote a letter saying we have no objection to you hiring Reliable.”

Gonsalves said that not every contract, procurement or loan from the CDB requires the bank to give a letter of “no objection”.

“That’s it, so when they talk in the letter about limited circumstances under which they can [declare] misprocurement, that’s it,” referring to a statement that the CDB issued last week.

“And, essentially what they are saying is if we have gone through the trouble to look at your document and say we have no objection, we are only going to reverse that if you tricked us, if something new came along that we realised that you tricked us. That’s what that says, ‘incomplete, inaccurate, or misleading information’,” the minister added.

Gonsalves said that in the letter that the CDB wrote declaring misprocurement, the bank talked about the basis of their declaration of misprocurement.

“Oh, they said Reliable had not been in operation for a sufficient number of years, Reliable did not have financial statements going back a sufficient number of years and because of these things we have declared misprocurement. But, ask yourself again, was there anything in the IBI report that was incomplete, inaccurate or misleading,” Gonsalves said.

He said that the IBI report on page four says Reliable Construction is a “newly-established company with no record of required years of experience and financial record.

“On page four!” Gonsalves said, adding that the CBD could not then say it was misled mislead or that there was inaccurate information.

“Because you don’t even have to get into page hundred and something. On page 4 of the document IBI said that,” he said.

The minister said IBI Group went on to say the construction outfit had done work in Canouan before it was incorporated as Reliable Construction.

The consultants further said that the Reliable Construction’s financial records were not audited, nor had it produced audited balance sheets for the last number of years.

“And it is on that basis, they said we have looked, Reliable has done work, sufficient number of projects and Reliable has also spent enough money and earned enough money and so on so we believe, they ultimately conclude, that Reliable is the right one,” Gonsalves said of the IBI Group’s recommendation of Reliable Construction to execute the project.

“The CDB wrote us a letter saying that the basis of your misprocurement is thus and such but everything that they said was in the report was already in their hands and the report was neither misleading nor inaccurate nor incomplete.”

The CDB declared misprocurement after a review triggered by a complaint from Bally and Bally Investments Ltd., one of the unsuccessful tenderers.

In his letter, Cameron Balcombe, the firm’s managing director, said that Reliable Construction did not have the requisite experience and had been awarded the contract based on a false declaration or undue influence on the process.

Gonsalves said that, as is his right, Balcombe wrote and complained and Ministry of Transport and Works sent the Sept. 14, 2018 letter to the IBI Group

The additional information was provided to the Ministry of Transport and Works on Sept. 21 and included emails demonstrating additional project experience information as requested.

“Following the review, the email provided more detailed description of the contractor’s experience. The tender evaluation report and the conclusion and recommendations therein are still applicable. Therefore, the recommendation for the award of contract to Reliable Construction Services Ltd., as stated in the report, remains unchanged,” Gonsalves quoted the letter as saying.

“Please let us know if you have any additional questions,” the letter, signed by Peter Spal, the engineer of the IBI group concluded.

He added: “If the CDB wanted to not give its no objection, if it wanted to object, it had all the basis to do so in the evaluation report issued by the IBI, but its own regulation says once you say no objection, you can’t backtrack unless there is information that shows that you were deceived and that did not happen in this case.”

Gonsalves said that unfortunately, the person who issued the no objection is no longer with the CBD.

“And I don’t say that to suggest any fault on the part of the person. I just say they are no longer with the CDB so they were unable to participate,” he said, referring to a recent meeting between the CDB and the Vincentian government.

“But, the CDB, at the point of issuing the no objection, had all the information they needed. And at the point of issuing the misprocurement declaration, did not, at any point, consult with the government of St. Vincent and the Grenadines, or the Tenders Board. So they looked back at the same document that they already had and said, ‘Boy, we change our minds.’ But their own rules forbid them from doing that.”

He said that the financial agreement between the CDB and the government speaks of cancellation and suspension of financing.