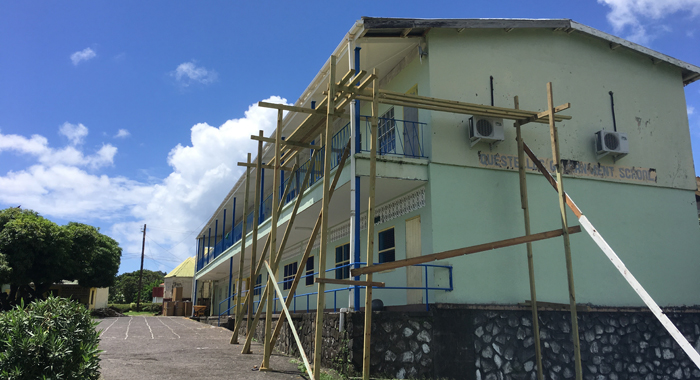 Questelles Government School, one of the 94 being repaired across the country. (iWN photo)

The government has financed an EC$6 million programme to repair schools across St. Vincent and the Grenadines.

This is in addition to a programme financed by the Caribbean Development Bank (CDB) through the Basic Needs Trust Fund (BNTF) to repair three schools and a further nine schools to undergo substantial repairs under another CDB programme.

Prime Minister Ralph Gonsalves told a press conference in Kingstown on Monday that 94 schools, including some owned and operated by the private sector, including denominational schools, will be repaired under the programme.

The prime minister said he has been assured that almost all of the 94 schools being repaired under the government financed programme will be ready by this Friday.

The remainder will be ready by next week Friday, ahead of the Sept. 2 commencement of the new school year.

Gonsalves, who is Member of Parliament for North Central Windward, where Park Hill is located, said he was disappointed with the progress on the Park Hill school.

Up to last week Wednesday, all the documents were not in place to go to the Tenders Board, he said, adding that chair of the board, Edmond Jackson, said that the soonest they would have been able to complete work on that was last Monday.

He said that there are things on which the Tenders Board was still seeking clarification.

The prime minister said that last week Wednesday, after getting the update, he said he wanted plan B and he now has this backup plan.

He said the government may have to build a wooden facility and fix up the toilets at the old Park Hill school while the new school is being built.

On these nine schools, very little repair will be done under the EC$6.5 million government programme.

Next year, these repairs will be in full flow and in some cases, depending on the manner in which it is being done, they might have to move part of the student body to somewhere else, because the renovations are extensive, Gonsalves said.

The prime minister said he was disappointed that all the furniture was not in place for last Monday, Aug. 19.

He said that some of the persons who had been constructing the furniture had given assurances but did not meet the deadline.

Gonsalves said has been assured that the furniture will be in place on Aug. 30.

3 replies on “94 schools being repaired”